In our recently published State of Mobile Experience Report for the UK, Three placed last for Consistent Quality as well as the majority of other core KPIs (except upload throughput). Congestion analysis is a critical capability for operators in the 5G deployment era: knowing where and when a network is overloaded is key, as it enables network investment in the locations where it will have the most impact.

To demonstrate the power of crowdsourced data and cloud analytics in congestion analysis, we used Tutela Explorer, a tool that can analyze and visualize huge amounts of data in real time, to investigate congestion issues for Three’s network in the UK as compared to other major operators. Data used for this analysis has been collected on a 3G, 4G or 5G connection between March 25th and November 10th, 2020.

Whilst there is no strict threshold of congestion used by network engineers, there are a number of different metrics that can be used to study and identify congestion. For this analysis, we began by looking at a few nationwide metrics to compare Three’s congestion to that of other major operators.

Download throughput is typically faster than upload throughput, so looking at the percentage of tests where the inverse is true can help identify congestion. Across the country, Vodafone has the highest proportion of tests where upload is faster than download. However, Three is on par with it, or worse, during peak hours between 4 - 9 pm. Of particular interest, Three sees the greatest change in the proportion of upload-faster tests from off-peak to on-peak times, which shows that its network particularly struggles to handle the increase in traffic from on-peak times.

A second indicator of network congestion is when the download throughput is lower than 1.5 Mbps, which is the minimum acceptable throughput for Tutela’s Core Consistent Quality metric and below the minimum speed needed for SD video. 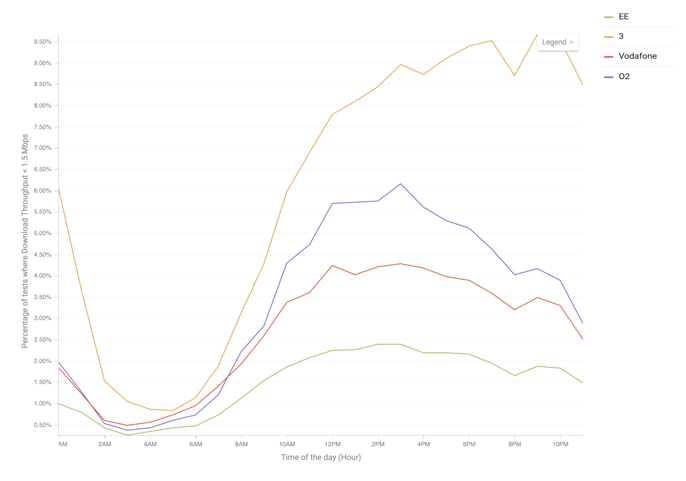 Once again, Three’s network stands out as struggling during on-peak times. Although all four networks are performing similarly overnight, a far higher proportion of tests on Three’s network are slower than 1.5 Mbps during peak hours, just under 10%.

While looking at the proportion of tests slower than 1.5 Mbps can tell us about a network underperforming in absolute terms, examining the percentage slowdown in download throughput from off-peak to on-peak times can help us see when congestion is significantly slowing the network down, even when it may not be to such serious levels as the 1.5 Mbps threshold. An analysis of download speeds monitored during on-peak and off-peak periods of the day reveals that Three has the highest percentage slowdown in average download throughput during peak hours at 36.49%. This slowdown is likely a result of a high volume of data traffic leading to congestion.

A deeper geographic analysis of download throughput slowdown on Three’s network comparing speeds during on-peak and off-peak hours in UK towns and cities where we see a significant Three subscriber base (more than 2500 download tests in the report period) presents the following results:

While Hull tops this list with a 48.69% reduction in download throughput during peak hours, it notably includes larger cities like London, Bristol and Leicester. Within these larger cities, congestion does not tend to be uniform, and is often based in small areas with particularly high data usage and/or insufficient local network infrastructure. Using Tutela Explorer, we are able to further narrow down the analysis to specific areas within London, to find problem areas or cells that particularly suffer from congestion.

The map shows pockets of the city where the slowdown in download throughput during on-peak hours on Three’s network is worst as illustrated by the red hexagons. Areas such as Croydon, Ilford, Southall, Wembley, Streatham, and Sutton experience higher congestion compared to other parts of the city.

Improvements on the horizon

Improvement in network capacity through 5G deployment and site densification would be promising solutions to alleviate Three’s congestion issues. Three obtained 20 MHz of 3.4 GHz spectrum last year for £151.3 million and will be able to acquire up to 185 MHz of spectrum in the 700 MHz and 3.6 - 3.6 GHz bands (in line with the 37% cap imposed by Ofcom) that are slated to be auctioned soon with the bidding process starting mid - January 2021.

Congestion issues can also extend past the radio layer. To this end, Three recently signed a backhaul contract with Virgin Media that will “connect more than 3,000 of Three’s 5G sites” according to Peter Kelly, managing director of Virgin Media’s business unit in an interview with Financial Times. Further, Three also awarded a full-fibre backhaul contract to CityFibre, which aims to connect 1,300 additional mobile masts in 59 towns and cities in September 2020.

These are positive steps towards creating a more robust network, however, they require substantial investment. While EE has the financial backing of BT, and O2 pooled resources with Virgin Media in their recent merger, Three needs solid plans for securing finances for such network improvement initiatives. Whether it chooses to do this through a similar approach of industry consolidation, or alternative funding sources, remains to be seen.

In the midst of the current round of 5G spectrum auctions, and as operators around the world look to optimize their network upgrades, congestion analysis against competitors can provide operators with a clearer picture of where network upgrades can have the most quantifiable impact on customer experience. How Three goes about maximizing its 5G opportunity to address congestion could very well have a demonstrable impact on the future of UK mobile communications.