In a move to utilize the 5G network for new technology practices, Entel conducted its first remotely controlled ultrasound pilot on a 5G network in June.

In our latest report, Entel performed the best in all three metrics Tutela analyzes. Entel scored the highest percentage for ‘excellent’ consistent quality result with 65.7%, an average download speed of 14.10 Mbps on the 4G/3G speed test, and a latency of 40.8 ms on 4G and 63.8 ms on 3G. 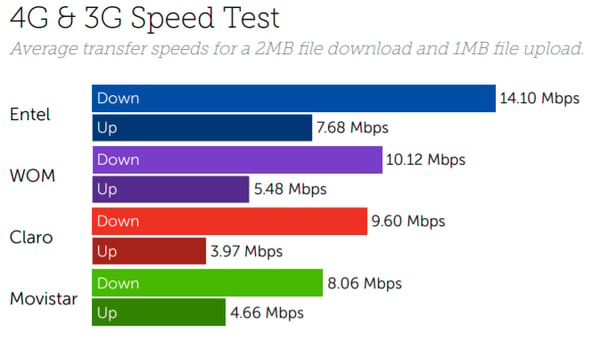 WOM has seen its 3G latency increase from 79.2 ms, only the second highest result in April, to 145 ms. Entel had the lowest latency on both the 4G and 3G networks, with a result of 40.8 ms and 63.8 ms respectively. Movistar’s 4G result has not changed from last quarter with 44.2 ms, but has improved its 3G result with 77.3 ms.

Our findings for Chile are based on 30.4 billion network quality measurements including 2.88 million speed tests between April and June. Our latest complimentary Mobile Experience Report is available to download from the Tutela Insights portal.