According to our latest Mobile Experience Report for Chile, WOM recorded the highest percentage for “basic” consistent quality, as Entel, which has pledged to invest nearly $600 million in Chile and Peru this year, scored highest for “excellent” consistent quality, representative of more demanding use cases such as streaming HD video, and also lead speeds and latency across the country.

Between January and March, WOM scored the highest overall percentage for “basic” consistent quality with a percentage score of 98% - proving its network is suitable for performing tasks like browsing web pages, internet messaging and social networking the majority of the time. Entel scored highest for “excellent” consistent quality across the country, representative of more demanding use cases such as streaming HD video or making reliable group video calls, with a percentage score of 64.1% for “excellent” and 97.6% for Tutela’s “basic” threshold. Movistar also scored highly for basic consistent quality with Claro the only operator to fall short of the 90% bracket.

With an average download speed result of 12.83 Mbps across both 4G and 3G, Entel top Tutela’s rankings for the fastest download speeds in Chile. Our results show a significant gap between first place Entel and second place WOM which averaged 7.61 Mbps, and who are closely followed by Movistar and Claro respectively. Across the country, Entel reach average 4G speeds of 15.29 Mbps, which climbed further to 15.86 Mbps in Santiago. 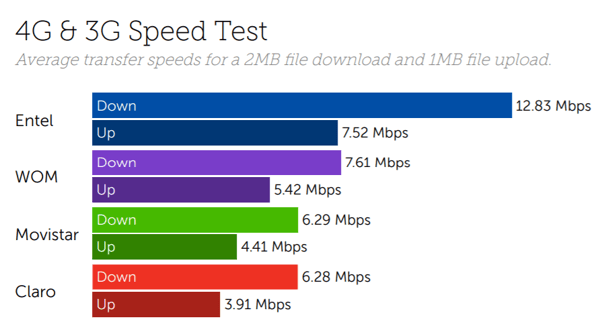 Entel inch ahead for 4G latency

Tutela’s latency results between January and March show a similar pattern with Entel just inching ahead of WOM to secure the top spot with the quickest average latency result of 41.2 ms. WOM fall just short of first place having averaged 41.5 ms and are unsurprisingly followed by Movistar and Claro in third and fourth place respectively. WOM, which placed first for latency in our March Market Snapshot, managed to retain the lead in Valparaíso and Biobio, where it averaged 41.9 ms on 4G, just ahead of Entel at 42.0 ms.

Our findings for Chile are based on 31.9 billion network quality measurements including 3.17 million speed tests between January and March. Our latest complimentary Mobile Experience Report is available to download from the Tutela Insights portal.