Saudi Arabia: How does congestion affect mobile experience in the kingdom

The world has changed a great deal in the past year and a half; and as we adapted to the ‘new normal’, the way we consume mobile services has changed drastically. The pandemic has highlighted how important a robust network infrastructure is, for almost all aspects of our lives now. Naturally, dependence on these services and existing telecoms infrastructure increased. For example, according to Khalid Hussain, Saudi country senior officer, Nokia “There was an almost 30 percent traffic spike in Saudi Arabia soon after the pandemic declaration in March 2020.” STC also saw a 40% increase in data traffic year over year.

An increase in data traffic of this magnitude often results in overloaded networks, congestion, and an unsatisfactory subscriber experience. To cope with this increase, both operators and the government have undertaken initiatives such as expanding coverage, building new infrastructure and spectrum allocations. However, in order to make informed investment, repair and optimization decisions, operators and regulators alike, need insights on when and where networks are congested.

In our first ever custom analysis for Saudi Arabia, Tutela examines the impact of congestion on mobile experience in the country, using Tutela’s crowdsourced data. The analysis includes Saudi Arabia’s three major operators and the results are representative of real world scenarios since they are based on data coming from actual mobile subscribers. Such insights would be valuable to operators to maximise their return on investment by prioritizing investments that can provide meaningful results to customers. Data used for this analysis has been collected on a 3G, 4G or 5G connection between January 1st and June 30th, 2021.

Mobily had a slowdown of 12.4%, while STC had the least observed slowdown in average throughput during on-peak vs off-peak hours at 10.2%. It is noteworthy that the gap between Zain and STC for slowdown in average download speeds is about 10% which is a considerable difference when it comes to network performance.

This demonstrates how important it is for mobile network operators to identify where and when congestion is at its peak on their network in order to mitigate these issues. 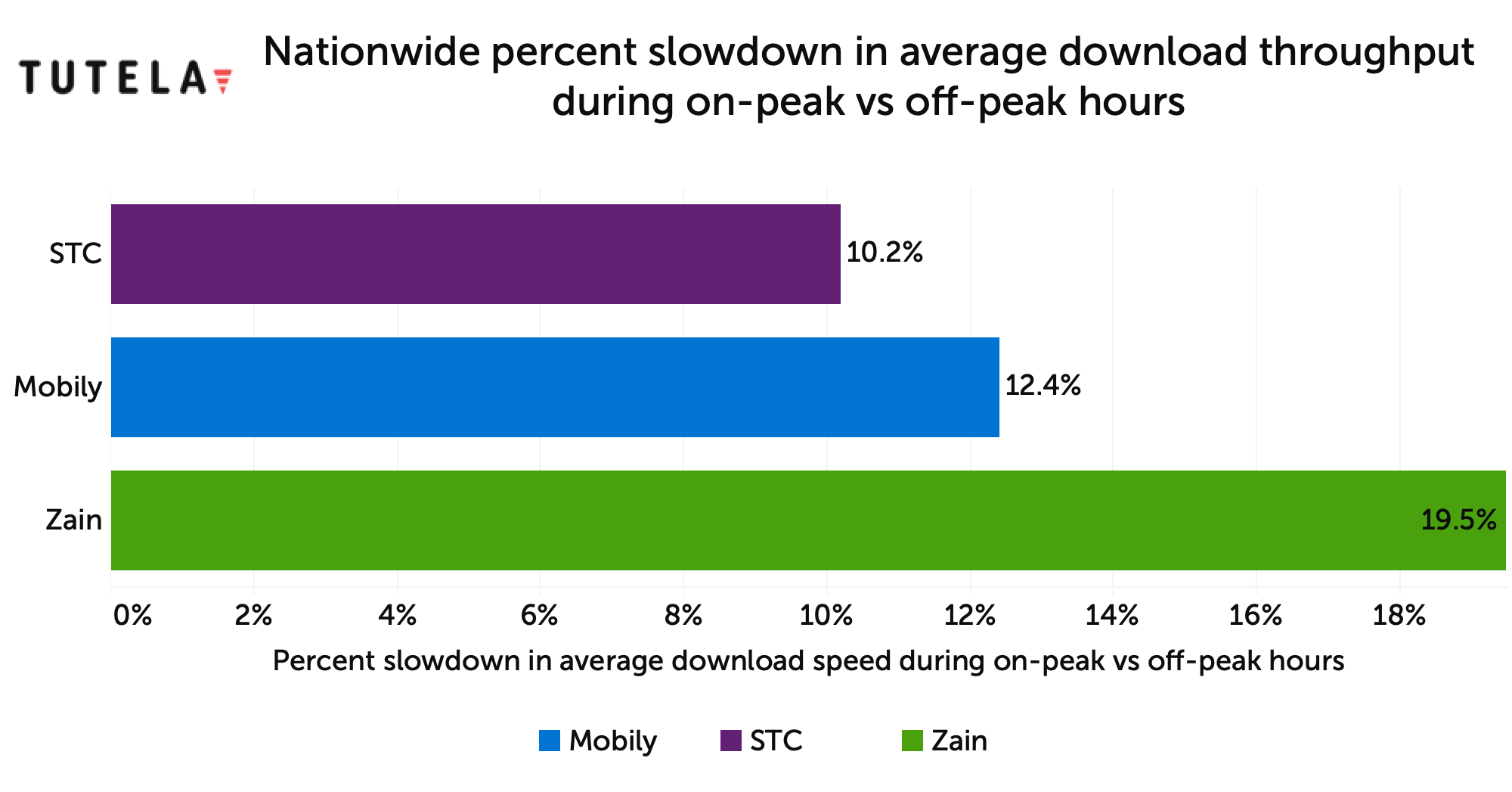 Another indicator of network congestion would be cases when the download throughput is lower than 1.5 Mbps, which is the minimum acceptable download speed for Tutela’s Core Consistent Quality metric measuring a network experience suitable for less demanding use-cases like SD video streaming, social media sharing and web browsing. 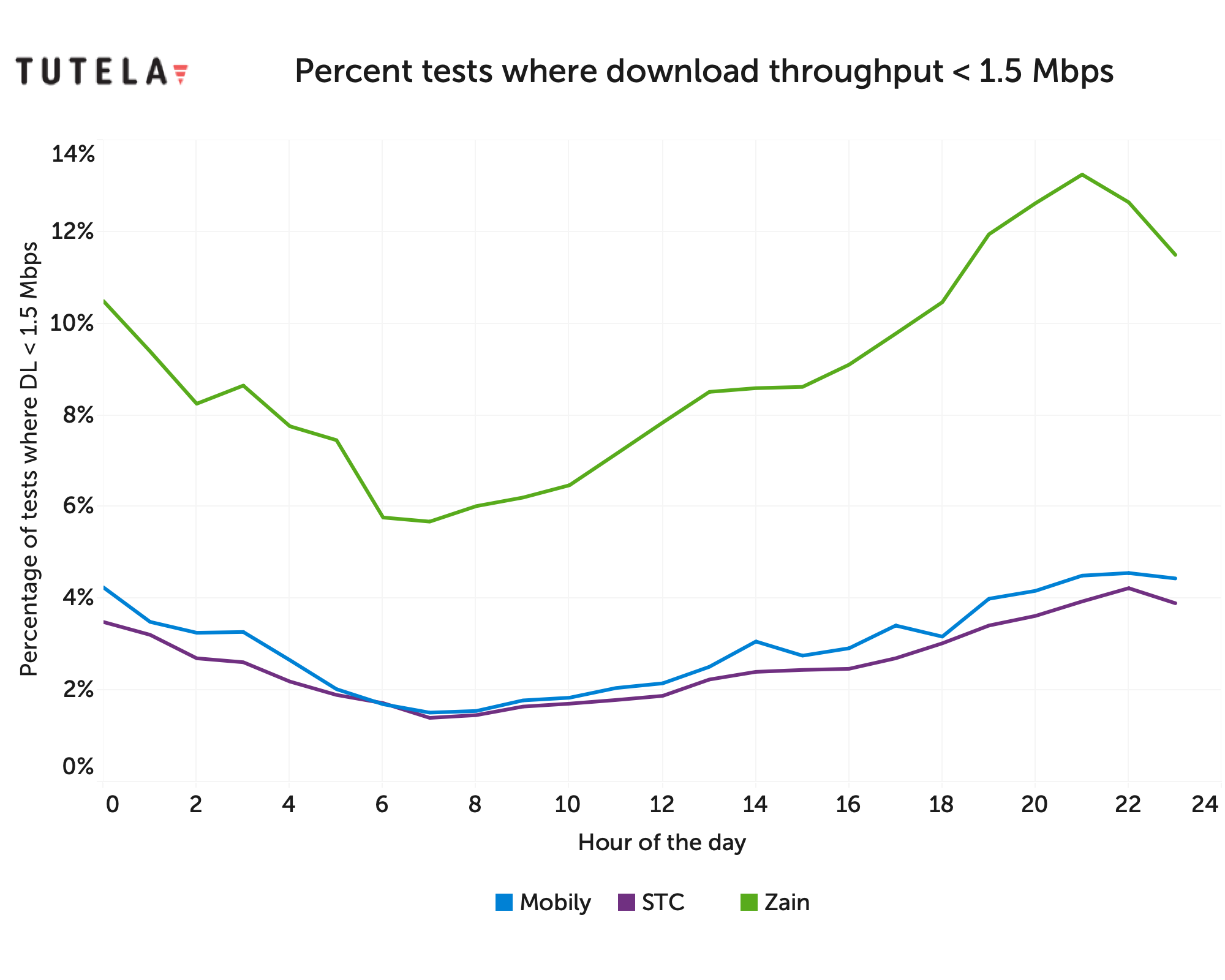 Zain’s network again stands out as struggling during on-peak times. It has a considerably higher proportion of tests that are slower than 1.5 Mbps at all times of the day as compared to its competitors. At its peak, Zain has about 13% of tests where the download speed is lower than 1.5 Mbps while for both Mobily and STC, that proportion is less than half as compared to Zain.

On a regional level, STC demonstrated a far better network performance in terms of lower congestion as compared to the other two operators

Drilling down geographically, we can observe how the three operators fared in terms of network congestion on a regional level. Overall, STC had the best network performance where congestion levels are concerned, meaning it had lower congestion regionally as compared to its competitors. While it had lower congestion in the northern and western provinces, provinces in the south and east, especially Najran, had comparatively higher congestion levels. Mobily experienced a higher slowdown in average download speeds in the central provinces of Al Qassim, Ha’il and Riyadh. Zain was the worst affected operator among the three with most of the regions on its network experiencing higher congestion issues.

However, it is interesting to see that the western provinces of Makkah (Mecca) and Madinah have lower congestion not just on Zain’s network but for all the operators despite being two of the most populous provinces in the country which might suggest the presence of a better network infrastructure in those provinces. They also see increased data traffic, especially during the annual pilgrimage of Hajj when religious tourists visit the holy sites of Mecca and Madina. 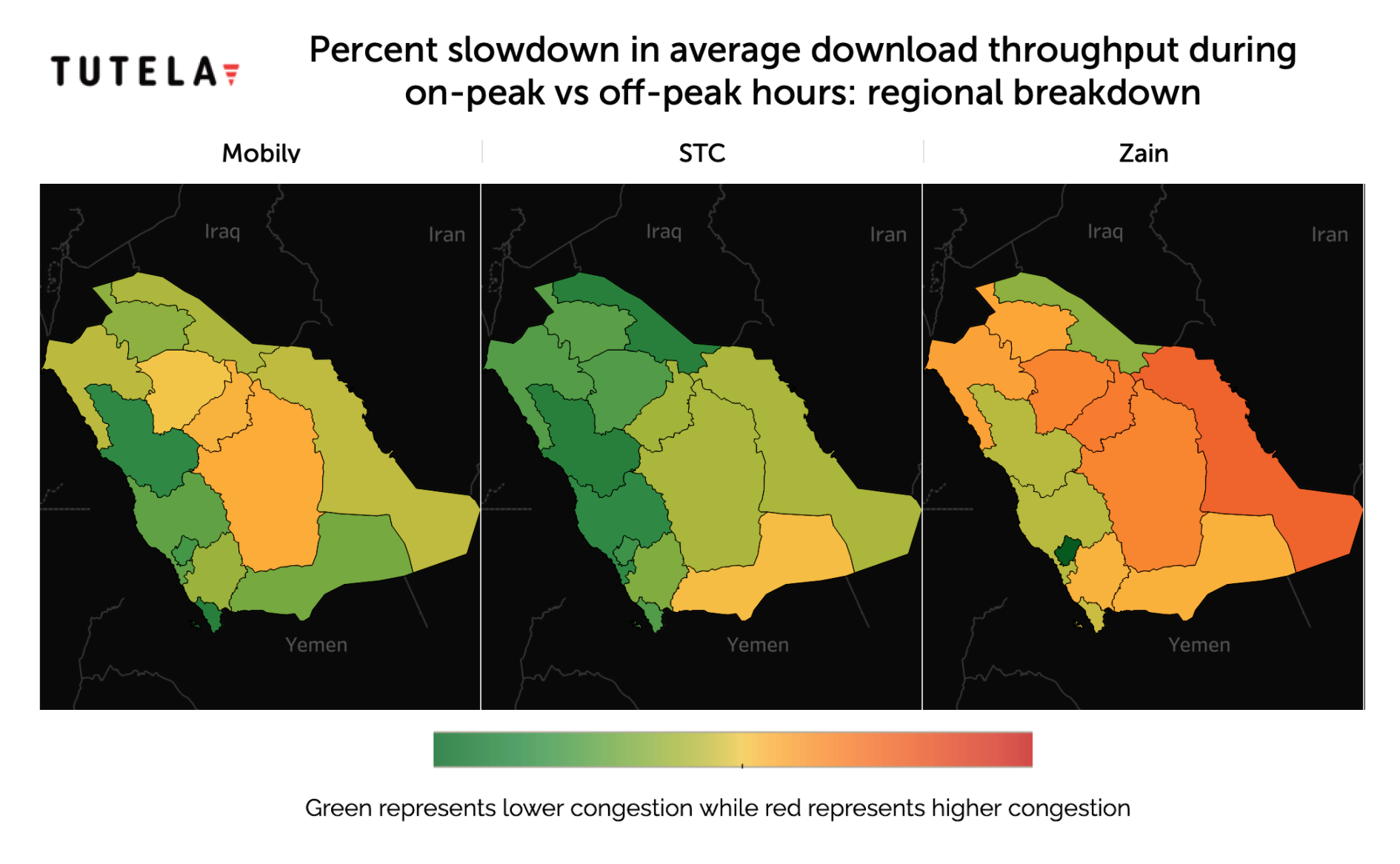 Comparing congestion issues in Riyadh city, the capital and most populous city of Saudi Arabia, Zain had the highest slowdown in average download throughput during peak hours at 23.1% followed by Mobily at 18.4%. STC subscribers experienced the lowest slowdown in average download speed of 12.3% during peak hours. This slowdown is likely a result of a high volume of data traffic leading to congestion.

Improvements on the horizon

5G deployment is one of the most important steps to improve network capacity and tackle congestion issues. According to the classification of the International Telecommunication Union, Saudi Arabia was ranked fourth in the world for 5G network expansion. This is evident through the 5G advancement operators have in the country. STC’s 5G network covers about 37% of the country’s population through over 6000 5G sites across 75 cities in the country. It also expanded 5G coverage by 48% in Mecca in preparation for Hajj.  According to a press release, Zain has 5G coverage in 50 cities in the country. As of February 2021, Mobily had 5G coverage in 21 cities.

Allocation of additional spectrum and building new infrastructure are other ways to boost capacity. In its public consultation published in January 2021, titled ‘Spectrum Outlook for Commercial and Innovative Use 2021- 2023’, the The Communications and Information Technology Commission provided information about releasing additional spectrum bands in the next two years. It plans to conduct two auctions, one in 2021 and the other in 2022. The first auction will happen in Q4 for allocation of an array of frequency bands including 600, 700, 2100 and 3800 MHz.

Saudi Arabia might be experiencing lower congestion issues than some other countries that we have examined before (read our previous blogs on congestion analysis here), and the above-mentioned initiatives are certainly positive steps to alleviate current congestion issues. However, it is extremely important for operators to identify where their investment will bring the most desired results when improving subscriber experience and thereby reducing churn.

In order to enhance benefits derived from deployment of valuable spectrum and establishment of other infrastructural assets, they need to use analysis based on large data sets that include tests conducted on real-world users to pinpoint locations where their network needs the most upgrades.