Mexico has room for significant improvements in service quality

While much of the focus for network testing is on download and upload speeds, Tutela’s unique approach to crowdsourced data helps reveal more specific insights about the functioning of wireless networks. Understanding spectrum deployment -- and crucially, how spectrum is utilized by customers -- is crucial to understanding how operators manage their resources and plan for the future.

In this instance, Tutela has analyzed 175 million tests from the last year in Mexico to understand spectrum utilization by operator. The charts below show the volume of LTE data transmitted and received by subscribers on the three national operators, broken down by LTE band. 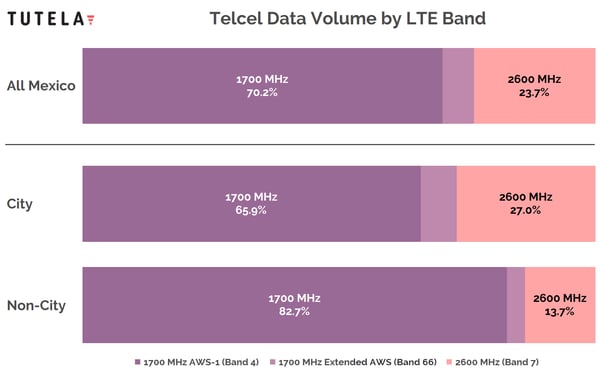 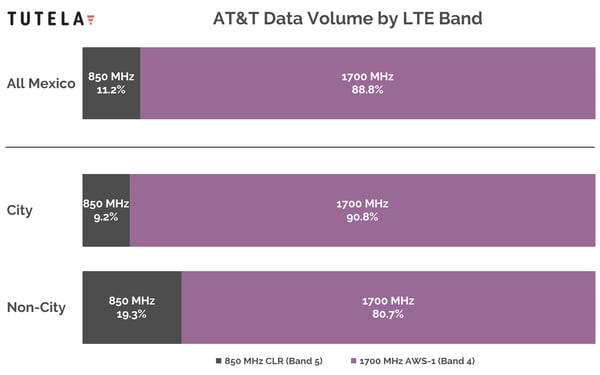 The most telling observation from the spectrum utilization charts is how heavily all of Mexico’s operators rely on mid-band frequencies for almost all of their LTE traffic. Movistar has LTE deployed solely on its 1900 MHz PCS holdings, and 1700 MHz AWS spectrum carries the overwhelming majority of LTE traffic for AT&T and Telcel.

The differences in where Telcel and AT&T have put their focus in LTE expansion speaks to the challenges that the two networks face, however. Telcel already has the largest LTE footprint in Mexico; despite the reliance on mid-band spectrum, which is not ideal for rural deployments, Telcel’s map shows the best geographic LTE coverage of any operator.

Telcel isn’t just the largest operator in geographic terms; it also has the most subscribers, and accounts for approximately two-thirds of mobile subscribers in the country. To service them, it primarily relies on 80 MHz of AWS spectrum it purchased in 2016 for its LTE network. Whilst that bandwidth may be sufficient to meet current demand, as consumers’ forecasted demand for mobile broadband grows, relying so heavily on that spectrum alone will present capacity issues. 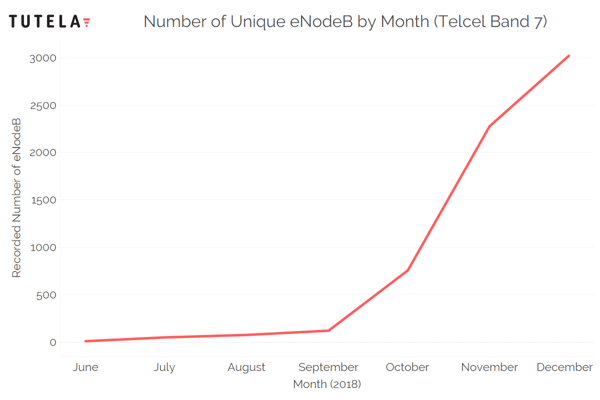 As a result, Telcel’s infrastructure improvements have been focused on deploying additional high-band spectrum in urban areas to add capacity, something that has happened relatively recently. Tutela’s data shows that 2600 MHz spectrum acquired by Telcel on the secondary market in 2017 started being deployed in mid-2018, with the number of active cell sites increasing rapidly between September and November.

While AT&T does own some 2600 MHz spectrum (which it acquired at auction last year), the operator has not yet deployed it for 4G. Instead, AT&T has focused on refarming the low-band 850 MHz spectrum it owns in some parts of the country from 3G to 4G. 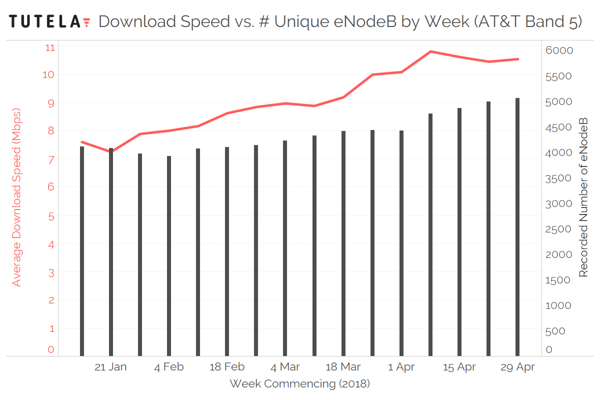 Tutela’s data shows that AT&T has steadily been increasing the number of LTE cell sites with 850 MHz; as the number of towers increases, average download speeds in the 850-enabled regions can be seen to rise significantly. The same thing happened with Telcel’s 2600 MHz deployment: regions that have seen a significant rollout of 2600 MHz saw an average 10% increase in average download throughput.

Both operators’ spectrum investments have been targeted at overcoming different network shortcomings in different ways. For AT&T, bringing LTE coverage to rural areas is the objective, so utilizing low-band spectrum is the answer. For Telcel, capacity is the challenge, so deploying high-band spectrum (and adding technological solutions like carrier aggregation and 4x4 MIMO) provides a solution.

In some respects, the development of Mexico’s wireless networks will follow a predictable path as spectrum is refarmed from 3G to 4G, and mature LTE-Advanced technologies are deployed more routinely. All three operators have 850 MHz spectrum that can be refarmed from 3G to 4G, for example, and AT&T and Telefonica recently purchased 2600 MHz spectrum which, when deployed, should satisfy capacity questions for the near future.

But particularly where low-band spectrum is concerned, the future is less clear. Mexico’s Federal Telecommunications Institute (IFT) is currently migrating pay TV operators off spectrum in the 600 MHz LTE band 71, with the aim of having 70 MHz of prime low-band spectrum available for mobile broadband by Q1 2019.

Although 600 MHz spectrum is attractive for its coverage potential, the Mexican government is also pursuing another solution for low-band rural coverage. Altan Redes, a wholesale network created via a public-private partnership and which operates in the 700 MHz range, launched last year but is still looking for its first significant clients.

Altan was supposed to make rural LTE coverage more economically feasible by utilizing low-band spectrum and offloading the high fixed costs of building out coverage to areas with low population density; however, even with keen government interest in the venture, customers from any of the national networks are still unable to utilize Altan's network.

With that perspective, the immediate desirability of the 600 MHz spectrum seems more in question. All three operators already own 850 MHz licenses (which only AT&T has made a 4G investment in); Altan offers a cheap and low-risk way to add rural coverage; so a significant new investment in 600 MHz spectrum for anything other than future considerations seems unlikely.

A deeper dive into Movistar’s utilization of the 1900 MHz PCS band (as an example) shows the excess capacity in the network. 1900 MHz carries all of Movistar’s LTE traffic, but examination of the Evolved-UTRA Absolute Radio Frequency data collected by Tutela shows that one of the three blocks of 1900 MHz that Movistar owns carries the majority of its traffic. While Movistar has LTE deployed on all three blocks in at least one location nationwide, there’s only a handful of areas in Mexico City where Movistar has two blocks deployed concurrently. This shows that the network has additional spectrum capacity remaining that could be built out to meet demand. 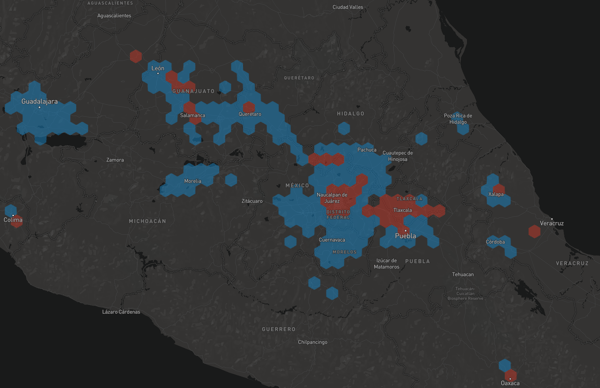 More high-band spectrum could also become available for operators to add urban capacity in the near future. Reports have suggested the IFT will auction spectrum in the 3300 MHz - 3600 MHz band at the same time as it auctions 600 MHz spectrum next year, which would be ideal for operators looking to invest in 5G infrastructure.

With regards to capacity, Telcel’s rapid 2600 MHz 4G rollout and the underutilization of the existing PCS band show that there’s potential for significant improvement -- and that’s without considering a potential auction of 5G high-band spectrum in 2019. With intelligent management of existing spectrum and ongoing work by the IFT to provide new spectrum options, Mexico’s mobile operators should have the spectrum resources they need to expand and improve their 4G networks and build towards 5G.

Written by Leandro A. Demarchi