Preparing for roaming traffic on the network in some of Portugal’s busiest tourist destinations, and prioritizing the right roaming agreements between Portuguese and oversees operators, is a vital part of ensuring that networks perform well during the critical tourism period.

Spanish and UK users were the most prevalent “tourists” on Portugal’s mobile networks in the popular tourism destinations of Porto, Lisbon, Madeira, Lagos and Albufeira during the summer of 2018, according to Tutela’s analysis of over 4.3 million records collected between 1st July 2018 and 30th September 2018.

However not all mobile tourists are alike; one important consideration as operators plan for the upcoming summer season will be how much additional data use roaming users will add to the network. Across the five travel destinations tested, Spanish roaming users used more data on average than their Portuguese counterparts during the 2018 holiday season, in particular in Madeira. However, German tourists tended to use less data each day than Portuguese natives. Being able to accurately predict the data load different roaming agreements will bring to a network will allow Portuguese operators to optimize their preparations and avoid either network congestion or network over-deployment. It can also be vital insight for successful negotiation of beneficial roaming partnerships.

Then it is important to consider the mobile experience that provided to roaming users on a host network, as this will likely inform customer feedback to their providers back home, and could impact future roaming partnerships. One trend that bears considering is the higher latency that roaming users tend to experience. While this is not something that host operators can necessarily address due to how web traffic for roaming users is routed – generally through the local provider network, then via international transit services, before finally travelling over the home operator to be processed. However, awareness of and preparation for the higher latency is a crucial part of network and expectation management.

The impact of this higher latency is likely tangible for users. Tutela uses two latency thresholds for our “basic” and “excellent” consistent quality metrics. When a record is better than the basic threshold of 100 ms, there is a high probability that users can make VOIP calls, which many travellers may wish to do using their free data allowance to avoid paying for international calls. However, for UK tourists in Lisbon and Porto, and German tourists in Madeira, users are likely to struggle to make reliable and consistent VOIP calls.

Meanwhile, for all Spanish, UK and German tourists, and indeed Portuguese users in Madeira, Lisbon, Lagos and Albufeira, latency was far higher than the “excellent” threshold of 50 ms. The impact of that is likely less important for most tourists – initial loading on HD video streams may take longer, for example, which could lead to a reduced user experience for those users who are used to being able to conduct such activity on their home networks.

In the upcoming era of 5G, this problem should be surmountable. 5G brings with it a change in approach from a “one-size-fits-all” network, to a highly dynamic network that is customized for different use cases.  Not only will the rise in software defined networking allow operators to tailor their network resources to tackle exactly these kinds of problem, but 5G’s overall ultra-low latency will reduce this latency “tax” on international traffic traffic.

Vodafone, which operates networks in both Spain and Portugal, have already begun work to demonstrate the benefit that 5G can bring to roaming. Earlier this year, Vodafone used a trial 5G network to allow two professional gamers to play video games without interruption whilst travelling between Portugal and Spain. 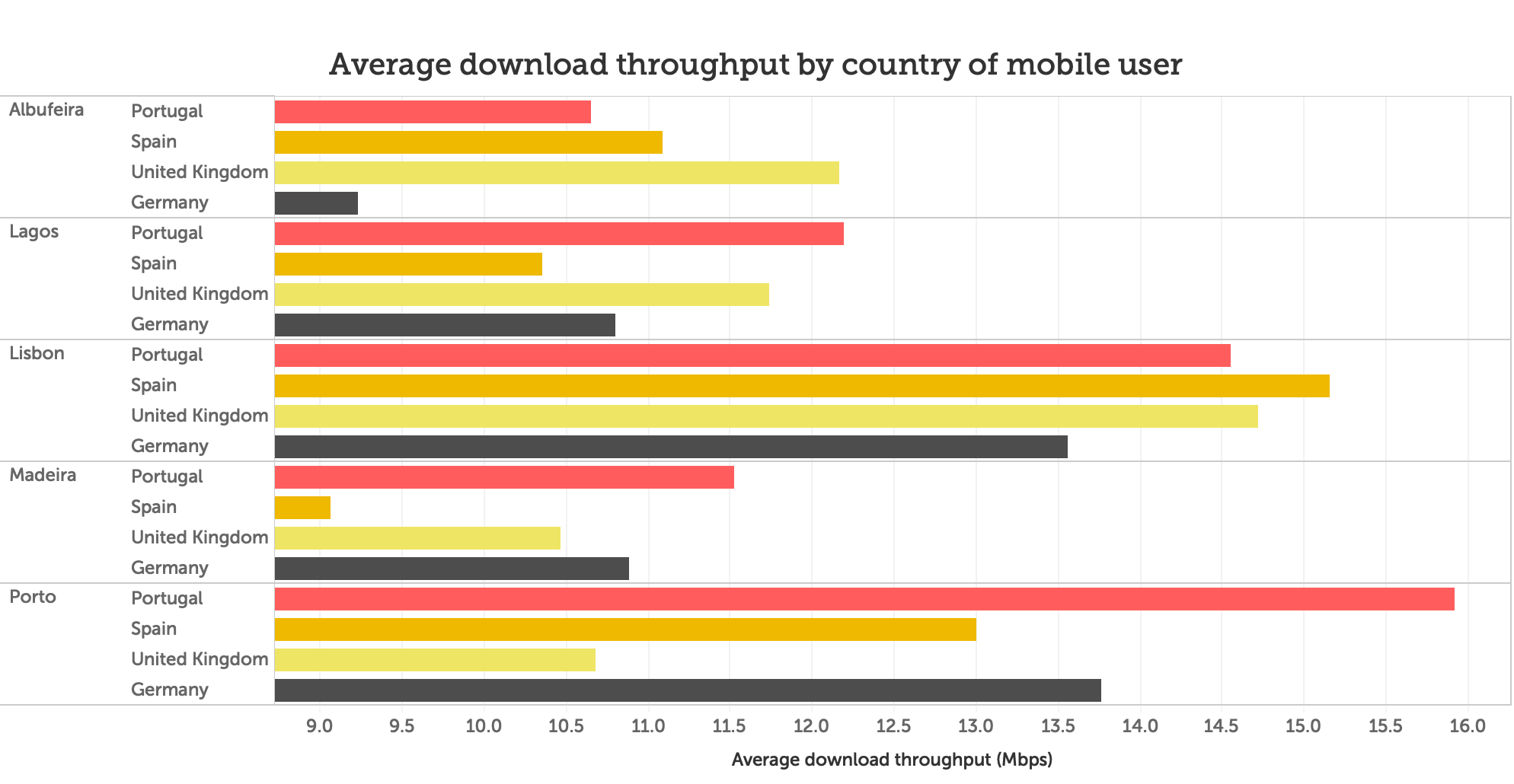 A resource currently over-provisioned for roamers in Portugal’s tourist destinations according to Tutela’s data is download throughput, which may be an avenue for scaling back to focus on latency in future. While UK roamers universally experienced higher latency for example, UK and Spanish roamers experienced faster download speeds than Portuguese native users in both Albufeira and Lisbon.

However, Portuguese users had faster speeds than in Lagos and Madeira, and significantly faster in Porto. This could be due to the mix of devices on the network (specifically more premium devices from roamers), but also may be some degree of traffic prioritization at work. What is notable is that all countries tested had average speeds in excess of Tutela’s excellent consistent quality threshold for download throughput (4 Mbps), meaning that, at least from a throughput perspective, the network should be able to handle HD video streaming, once the initial lag is overcome.

One of the most important findings of Tutela’s analysis is the sheer difference in quality of experience between roaming and national users, despite traffic using the same host networks. As we head once more into the summer tourist season, Portuguese operators can use the insights from last year to prepare for the impact of new international users and their expectations of the network.