When it launched its non-standalone 5G network on September 30, Rakuten, Japan’s newest mobile network operator (MNO) made another stride in establishing its position as a legitimate competitor to the three major incumbents: KDDI Corp’s au, NTT Docomo, and SoftBank. The operator also launched a new and upgraded service plan called “Rakuten UN-LIMIT V”, priced at 2,980 yen (US $28), the same as their original "Rakuten UN-LIMIT 2.0” plan that, according to Rakuten CEO Hiroshi Mikitani, is 71% cheaper than other 5G services in Japan.

Its previous marketing campaign (offered to attract the maximum number of subscribers), which gave mobile services free of charge to the first 3 million subscribers for a year, applies to new subscribers of Rakuten UN-LIMIT V as well.

Following this announcement, Tutela has taken stock of how Rakuten's initial network launch has shaped up.

How is Rakuten different from other operators

Rakuten upended the telecom industry in Japan through price differentiation (fostering competition in an established market) that it achieved through technological innovation. According to the company, its network is a fully virtualized “cloud-native” and containerized network leveraging the Open Radio Access Network (O-RAN) technology. It is using multiple vendors for procuring the required equipment and building different network functionalities. O-RAN allows operators to create an architecture where they can separate hardware from software, reducing reliance on proprietary equipment thereby facilitating use of multiple equipment suppliers. Using O-RAN and network function virtualization through “cloud-native” technology along with the fact that it does not have any legacy networks to maintain, all combined, are factors that help Rakuten to save costs incurred by traditional operators the benefits of which they expect to pass on to subscribers in the form of lower plan prices. It plans to cover 70% of the population by March 2021, and achieve full coverage by summer of 2021. Rakuten plans to launch its 5G standalone (SA) network in Japan in the second quarter of 2021, using a SA containerized 5G core developed with NEC.

[1] As this analysis is aimed at Rakuten's network, Common Coverage Areas have not been used, as such results are not directly comparable to Tutela's published reports.

Overall, Rakuten users rank fourth nationally in Excellent Consistent Quality, Tutela’s metric for user experience against a range of common but high-intensity use cases such as 1080p video streaming, live mobile video broadcasting, online gaming, and HD video calls. With an Excellent Consistent Quality of 60.86%, Rakuten falls behind considerably when compared to the other three national operators.

This notable difference between Rakuten and other major operators’ Excellent Consistent Quality might be a result of speeds being throttled when Rakuten users are roaming on its partner network au. 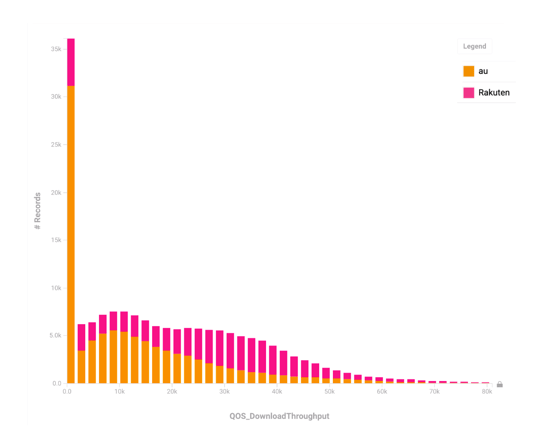 It can be observed in the above chart that a significant proportion of Rakuten users get a speed of approximately 1 Mbps — particularly when connected to Au’s network —  indicating throughput throttling. Further, Rakuten has also confirmed a cap on data usage while roaming on its domestic partner au’s network. Users are limited to a maximum speed of 1 Mbps after they have exhausted the allocated 5 GB of data, which goes some way to explaining the spike in observed tests at 1 Mbps, as well as the relatively low ECQ result for Rakuten users when roaming on other networks.

User experience on Rakuten’s network Vs. on Other major operators’ network

However, Rakuten users have a better user experience on Rakuten’s own network, with an Excellent Consistent Quality of 73.04% compared to when they are roaming on other operators’ network. With the addition of the KPI “Time to First Byte” to Excellent Consistent Quality as part of Tutela’s updated methodology, user‘s overall experience is represented in a better way from the time they attempt to connect to the network. Furthermore, the new connection reliability measure ensures that records with connection attempts that fail are considered as a ‘fail’ against consistent quality thresholds.

As users increasingly rely on a robust network performance during these unprecedented times, Rakuten’s superior performance on its own network may make it a competitor to watch out for once it gains considerable coverage in the country. Having already reached 1 million subscribers within 3 months of its network launch, it may take over other operators in terms of market share due to affordable plans and better network quality.

When comparing latency, Rakuten’s median latency at 18.30 ms is lower than the median latency of other major operators which can be leveraged to improve its overall user experience ranking.

Percent of time spent on Rakuten’s network Vs. on Other major operators’ network

Rakuten users spend the majority of their time (54.75%) on Rakuten’s network as compared to other operators (45.25%). This indicates that Rakuten users are majorly concentrated in areas where it has launched its own network, including Tokyo, Osaka and Nagoya.

This can also be observed in the coverage maps created using Tutela Explorer, with only a marginal increase in data consumption outside of the above-mentioned areas.
Rakuten users on Rakuten's own network          Rakuten users on other operators network 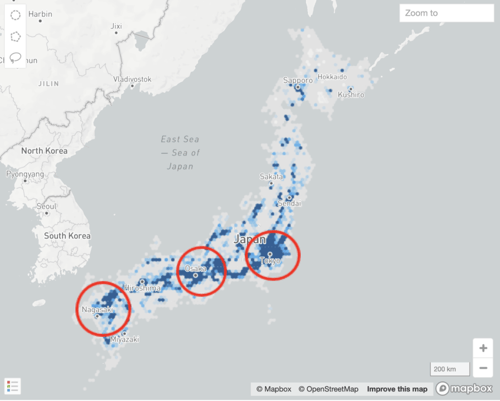 Higher data consumption is visible in Tokyo and areas in and around Osaka and Nagasaki. Rakuten already has network coverage in Tokyo and Osaka. Nagasaki and the nearby region are potential areas for network expansion for Rakuten. These coverage maps represent data traffic on Rakuten’s 4G network.

At present, Rakuten users on its 4G network are experiencing lower download speeds, higher latency and lower overall performance nationally, as opposed to excellent upload speeds. On the other hand, Rakuten users experience better performance (Excellent Consistent Quality) when on its own network. While Rakuten’s 4G network is majorly present in three areas in Japan, the newly launched 5G service is available in parts of Tokyo, Kanagawa, Saitama, Hokkaido, Osaka and Hyogo.

With limited coverage across Japan, it may not  be possible to gauge network performance effectively yet[2]. As the coverage grows, a clear picture of the network’s performance will emerge in terms of speed, reliability and scalability.

[2] Since Rakuten’s 5G service was launched very recently, sufficient data on 5G is not available. This analysis has been done solely based on 4G data available for all the operators concerned.