As the largest country in South America, you might expect it can be difficult for one mobile operator to dominate the majority of regions across the country, and according to our research, you’d be right.

With reports that the citizens of Brazil are beginning to shift from prepaid cell lines to postpaid subscriptions (prepaid lines fell by 17.7m and postpaid grew by 11m May ‘17 - May ‘18), likely the result of a drop in charges for connections between operators, but also because of the fact that more and more people are using data to communicate and using more data on average, now appears to be an important moment for network operators in the country to reach the top spot for real-world download speeds.

To understand which mobile operators are performing best and why, we took more than 7 million mobile speed tests in June and calculated the average speeds users are getting on each network. We test mobile networks in a way that represents the day-to-day usage and experience of real-world mobile users, such as accessing websites or downloading and sending images (not the peak speeds under test conditions), so we can see what a typical user is experiencing on any given network.

Key findings from our testing:

We analysed performance in each region and found big differences in which operators placed first for download speed.

Our first map below illustrates the best performing network for download speed by region (across both 3G and 4G connections), showing Claro, Oi, TIM and Vivo each with regions across the country where they claim the top spot.

TIM and Claro dominate most of this map, indicating that their subscribers are, on average, getting a faster download speed during normal mobile usage.

4G : Vivo and Claro take the lead in most regions 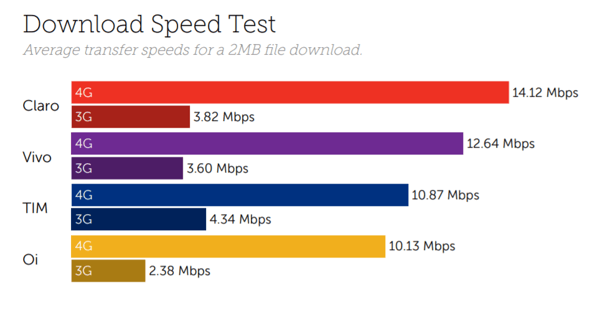 Agencia Brasil recently released a report showing the market share of each operator in the country, with Vivo the market leader reporting 31.9% of the lines, followed by Claro at 25%, then TIM with 24.25% and finally Oi 16.5%. Despite their high market share, our network tests for June actually placed Vivo in third place for download speeds overall, reporting averages of just 6.39Mbps across both 3G and 4G, behind both TIM and Claro who scored 7.22Mbps and 8.02Mbps respectively. 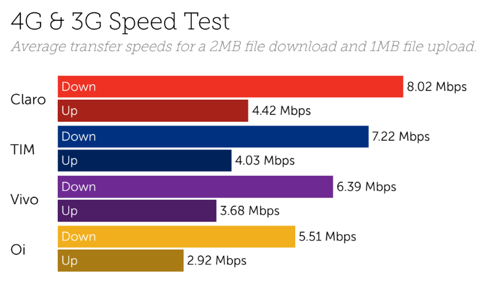 4G speeds are falling behind in the north

Further analysis into average download speeds across all operators appears to highlight a stark difference between 4G speeds for those in the north of the country and those in the south. Unsurprisingly, Sao Paulo reports the fastest average download speeds across all networks, where users can expect speeds of 12.10Mbps and Roraima brings up the rear, where users get by on just 4.20Mbps. 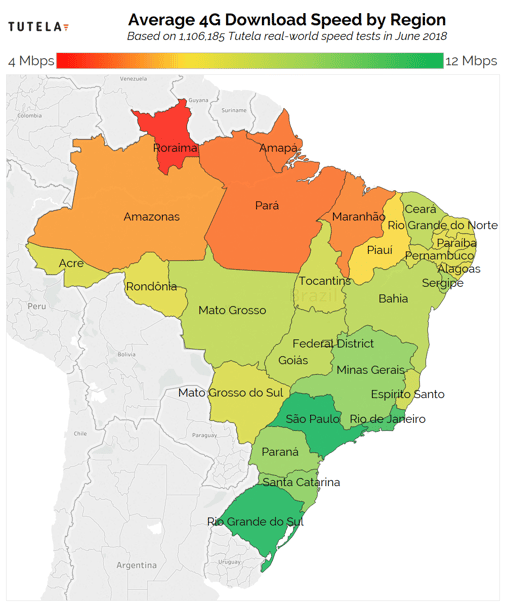 This could be explained by the fact that many major hosting service providers (including Amazon Web Services, Microsoft Azure and Google) have significantly more infrastructure presence in the south, and therefore many applications and websites running on this infrastructure could therefore be slower in the north. It’s worth bearing in mind that these are still the real world speeds users will be receiving for typical usage and will no doubt have an impact on customer experience.