As Entel continues to expand its mobile network coverage across Chile, including a recent launch of mobile broadband in Alto Hospicio, it also leads our overall network ranking, based on crowdsourced tests gathered between October and December 2018. WOM consistently placed second for speed and latency, as well as delivering improved network stability across the country.

Across Chile, Entel leads our latest crowdsourced download speed tests, averaging 12.49 Mbps based on more than 235,000 download tests on the Entel network. With average speeds between October and December last year of 7.61 Mbps, WOM placed second across the country, closely followed by Movistar and Claro - which averaged 6.65 Mbps and 5.22 Mbps respectively.

Averaging 8.11 Mbps on 4G and 2.09 Mbps on 3G, Entel also leads upload speeds for both network generations. WOM, Movistar and Claro follow, ranking second, third and fourth respectively overall across the country as well as in Santiago, Valparaíso and Biobio. 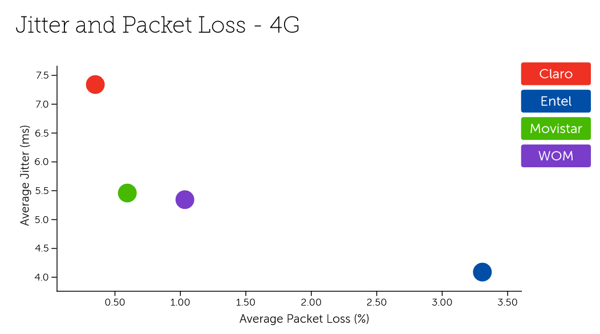 Our findings for Chile are based on 25.4 billion network quality measurements including 2.5 million speed tests between October and December 2018. Our latest complimentary Mobile Experience Report is available to download from the Tutela Insights portal.