How MVNOs compare to Verizon, AT&T, T-Mobile, and Sprint

According to the most recent FCC numbers, around 300 mobile virtual network operators serve nearly 35 million prepaid subscribers in the US every year. With their ability to target specific niches with creative plans that postpaid networks can’t (or won’t!) offer, MVNOs make an attractive proposition for millions of consumers.

But when it comes to the quality of the service, little information is publicly available about how MVNOs compare to the host operators. Most MVNOs disclose in their terms of service that customers may receive a lower priority than postpaid customers at busy times, but the precise details of the arrangements between MVNOs and host operators are not publicly available.

For Tutela’s latest US LTE network report, we analyzed 240 billion network measurements from 2.8 million handsets across the US in the first six months of 2018, giving us a unique ability to compare the performance of MVNO customers against subscribers on the host network.

Our data shows that across the board, MVNO customers see slower download speeds than subscribers on the host networks. That’s not the whole story, however: some MVNOs see speeds barely below those of the host network, while others are significantly slower. 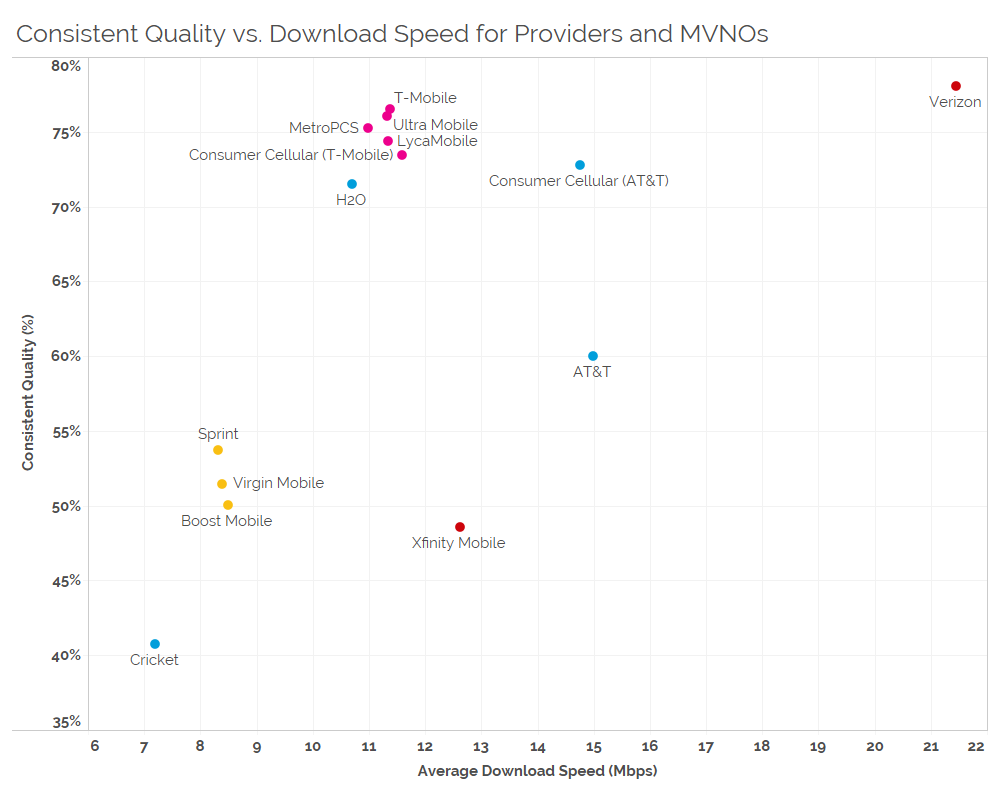 The graph shows that for T-Mobile and Sprint, the MVNOs’ average download speeds are within 1 Mbps of the host network, and the discrepancy is likely attributable to geographic differences, since the distribution of customers on MVNOs is more regional than on the national carriers.

On AT&T and Verizon, however, there is a noticeable gulf between the MVNO and host operator speeds. Comcast’s Xfinity Mobile appears as an attractive proposition to consumers, since it offers a much cheaper unlimited plan than Verizon itself, but still claims to have all the benefits of Verizon’s number-one-ranked network.

However, our tests found that Xfinity Mobile subscribers saw an average download speed of 12.6 Mbps, compared to the Verizon average of 24.0 Mbps (measured only in regions where Xfinity Mobile is available). Consistent quality, a metric that calculates the percentage of time subscribers have a good enough connection to use the majority of apps and services, was 48.6 percent for Xfinity Mobile and 82.4 percent for Verizon.

Unlike some other MVNOs, Xfinity Mobile doesn’t impose a speed cap on regular smartphone data. The only limitations that Comcast says it imposes is a slowdown to 1.5 Mbps after 20GB is used in one month, a 600 kbps limit on mobile hotspot data, and a limit on streaming video quality to 480p.

While Comcast may not be actively throttling customers’ speeds, the same is not true for other MVNOs. Cricket, an MVNO running on AT&T’s network, advertises maximum speeds of 8 Mbps on LTE, and 4 Mbps on 4G, and the effect on customers is evident in the data.

The majority of tests taken on Cricket's network (60.5%) are delivering speeds below 4 Mbps, the threshold that Tutela uses to measure consistent network quality.

The cause of slower speeds

Digging deeper into the data, the difference between a network that is "hard" throttling at a specific speed (Cricket) and one that is not (Xfinity Mobile) becomes clear.

On a histogram of speed tests from Xfinity Mobile customers, there is a small peak in the number of users seeing download speeds of 2 Mbps, but that could well be reflective of the 1.5 Mbps limit that Comcast imposes on lines that use 20GB in a single month.

Although the speeds seen by Xfinity Mobile customers may be slower than for Verizon’s customers, Comcast is delivering the service it advertises. In its broadband disclosure policy, the company says that users should see “typical download speeds of 5-12 Mbps and upload speeds of 2-5 Mbps,” which is consistent with Tutela’s data.

For Cricket, which does impose a strict speed cap, the histogram looks quite different. Cricket users mostly see speeds around 3-4 Mbps with few tests showing speeds greater than that, while AT&T has a long-tail distribution with tests up to 60 Mbps, as you would expect. There is a spike around 3-4 Mbps for AT&T customers as well, which likely reflects AT&T’s policy of actively managing traffic during times of congestion.

Not all MVNOs are created equal

Overall, Tutela’s data shows that a customer’s experience on an MVNO is going to depend on a particular network. T-Mobile and Sprint -- which between them account for the majority of MVNO customers in the US -- offer MVNO subscribers a similar service to what the networks’ own subscribers experience.

Some MVNOs running on Verizon and AT&T, on the other hand, experience performance that’s very different to what the networks offer their own customers. The performance differences are reflected in the lower price of MVNO plans -- and Tutela’s data shows that customers are ultimately getting the speeds that their MVNOs advertize -- but it’s proof that MVNO service and host network service are not always one and the same.