Despite a few thousand kilometres of ocean between the two, Australia and New Zealand
are forever mistaken as one country or with similar characteristics, leading to many rivalry
moments over the years. From sport, to famous actors, and even dessert, both
countries are always trying to be seen as the separate country they are. But just like any
sporting event, in the mobile industry world it's of great interest to see these two go head
to head.

With regards to 5G, Australia has gone full steam ahead with deployment, with Telstra reporting coverage of 41% of the population already and a target established of 75% coverage by June 2021; the Australian operators will also focus their attention on a 5G high-band auction set for March 2021. In New Zealand, there has been a different approach to 5G deployments: earlier this year, a decision was made to release the 3.5 GHz rights to those operators that expressed interest as a direct offer rather than the initial auction-style format, thus reducing one obstacle to 5G deployment that has thwarted other countries' plans due to the pandemic.

While current commercial deployments in New Zealand may be far less widespread
than Australia, there are still commercial deployments available. Vodafone has launched 5G in parts of Auckland, Wellington, Christchurch and Queenstown, while Spark has mobile 5G launched in Palmerston North, downtown Auckland and Takapuna. In Tutela’s latest Global Mobile Experience Report, Australia was in 15th place for Excellent Consistent Quality, whilst New Zealand was not far behind at 20th. For Core Consistent Quality, Australia and New Zealand tied for 17th place. 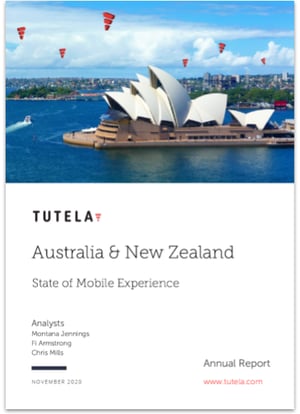