As Telefónica announce an agreement with Millicom for the sale of Telefónica Costa Rica, Panama and Nicaragua, its Movistar brand in Argentina continues to perform well in our latest tests, leading overall 4G download speeds across the country, whilst Claro perform best for network stability.

Averaging 5.83 Mbps on 4G, Personal lead our latest upload speed tests collected between November and January. Similar to our August report, Movistar and Claro follow closely, averaging 5.19 Mbps and 4.95 Mbps respectively. Claro inch ahead on 3G, taking the upload speed lead away from Personal by 0.05 Mbps across Argentina and overtake Movistar for 4G speeds in Córdoba and Santa Fe.

Relative to the three network operators in Argentina, Claro demonstrated the best network stability across the country on 4G, with the lowest average jitter and packet loss between November and January. Claro also performed well on 3G, although recorded higher average jitter at approximately 11.0 ms, putting them behind Movistar. Our 4G tests showed similar results in Buenos Aires and Córdoba, whilst in Santa Fe, Movistar recorded much higher jitter on both 4G and 3G tests. 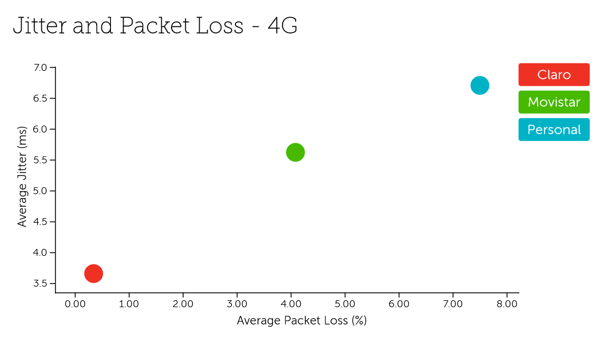 Our findings for Argentina are based on 54.8 billion network quality measurements including 7.17 million speed tests between November 2018 and January 2019. Our latest complimentary Mobile Experience Report is available to download from the Tutela Insights portal.