In just over 1 year, for the first time Qatar will host the FIFA Men’s World Cup, the international football championship that takes place every four years. Qatar will be the smallest country (by population) in history as well as the first country in the Middle East to host the tournament. These matches will be played in eight stadiums with around 1.5 million fans expected to attend the event.

What is notable about this event is the massive temporary increase in the Qatar population. While the current population of Qatar is about 2.6 million, this additional increase of 1.5 million people in the country (a 52% increase during the event), combined with a likely surge in mobile usage per user, will result in unprecedented demand on the country's mobile networks, operated by Ooredoo and Vodafone.

In order to gauge how ready Qatari networks are to handle growth in demand of this magnitude during the FIFA 2022 World Cup, Tutela analyzed 1.1 million speed and latency tests conducted on the smartphones of real-world users between April 1st, 2021 and September 30th, 2021. This analysis looks at the current network performance of these operators and how and where congestion occurs. The analysis included results taken from a wide range of devices (from premium, mid and low-end devices) across the whole country. Qatar's population is substantially comprised of migrant workers who are more likely to use non-premium / non-flagship devices with lower performance capabilities.

Across all hours of the day on average, both Ooredoo and Vodafone provide a similar mobile experience to their subscribers

In simple terms, 65% of the time in our testing, users on both networks had a good enough connection for the above-mentioned apps. Virtually identical for both operators meaning they provided a similar mobile experience to their subscribers.

However, during peak hours, Vodafone experiences a steeper decline in mobile experience

Looking at Excellent Consistent Quality by time of day can indicate when users get the best experience. For both operators, Excellent Consistent Quality across Qatar was much higher during off-peak hours, between 2am and 7am and started declining throughout the day as more people started using their devices - and is lowest between 7pm and 9pm indicating congestion issues during peak hours. While this trend was observed for both operators, Vodafone struggled more during peak hours, reaching 59% at 9pm, 6 percentage points lower than Ooredoo’s at the same hour.

According to FIFA, kick off timings for both group as well as knockout-stage matches are between 1pm and 10pm AST. Since all these matches will be played and aired during peak hours with kick off time for the final match set at 6pm AST, data traffic is expected to be extremely high during these hours. Looking at its superior performance, especially during peak hours, Ooredoo appears to be better prepared for handling the exponential growth in data usage anticipated next year. 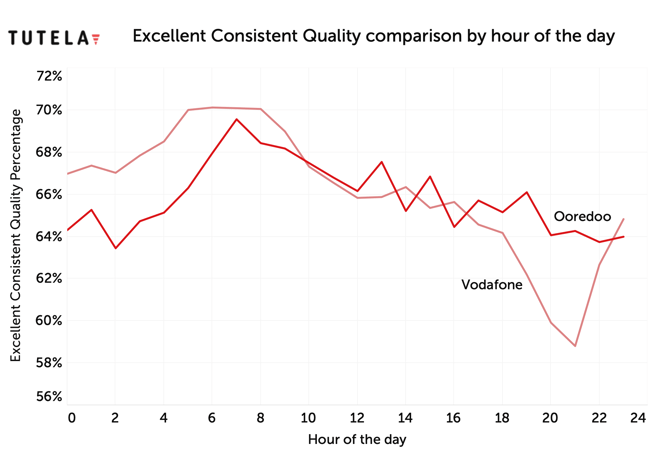 Netflix recommends a 5 Mbps download throughput threshold for watching High Definition (HD) content. Although many people will view World Cup matches in-person in stadiums, at public screenings and on TVs, a significant number of people are likely to watch these matches on mobile devices, all simultaneously, and to enjoy the games in HD, the network will need to consistently deliver speeds of at least 5Mbps during these highly congested times.

The trend was identical for both operators with the percentage of tests above 5 Mbps falling as the day progressed. However, in terms of absolute percentage points, Ooredoo again outperformed Vodafone with a higher percentage of tests passing the 5 Mbps threshold throughout the day. At 9pm, while both operators had the lowest percentage of tests below 5 Mbps, Vodafone had 10% more tests failing to reach the threshold. This is another indicator of how network congestion affects performance while shedding light on where Vodafone’s investment can have the most tangible impact on improving subscriber experience through network improvements. 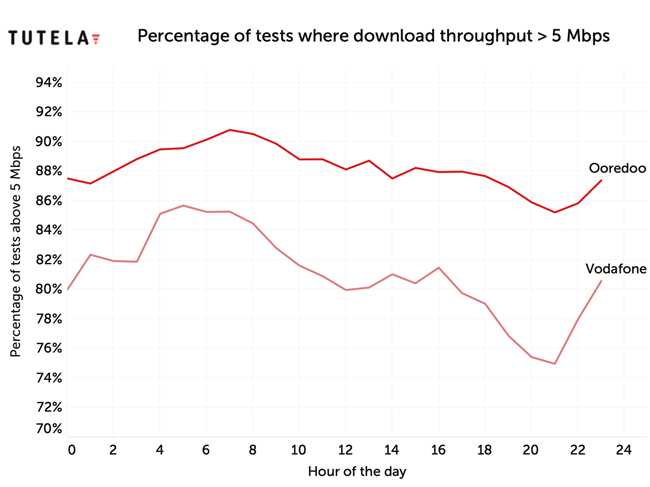 Assessing the percentage slowdown in download throughput during off-peak versus on-peak hours is a direct indicator for identifying instances when the drop in speed is being caused due to congestion. In Common Coverage Areas across Qatar, Ooredoo had a slowdown in average download speed of 8.0% during peak hours while slowdown on Vodafone’s network was more than twice that of Ooredoo reaching 19.7%.

This huge gap between the two operators highlights the need for a capacity boost on Vodafone’s part to cope with the expected massive increase in mobile data usage during FIFA 2022. 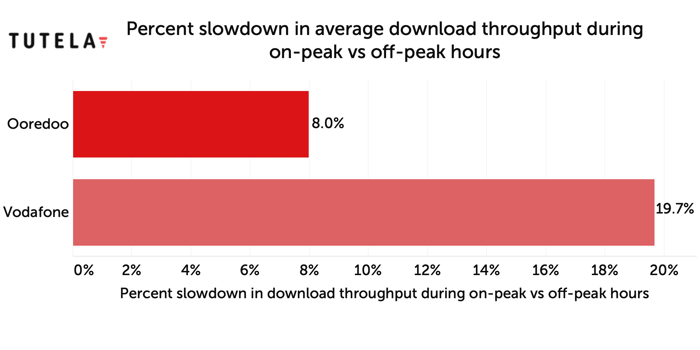 The distance between the two farthest stadiums (out of the eight where World Cup matches will be played), Al Bayt stadium in Al Khor and Al Janoub stadium in Al Wakrah is 55km, meaning all the stadiums are situated very close to each other. The map below illustrates municipalities in Qatar that house the eight stadiums. Areas in and around all the stadiums have pockets that are more congested than others. However, Lusail Stadium, which will host the FIFA World Cup final, appears to suffer from more congestion than other areas.

It can also be observed from the map that Doha, where four out of eight stadiums are located, does not experience as much congestion as some other areas despite being the  most populous city in Qatar indicating that infrastructure in the city is potentially much better than other areas. 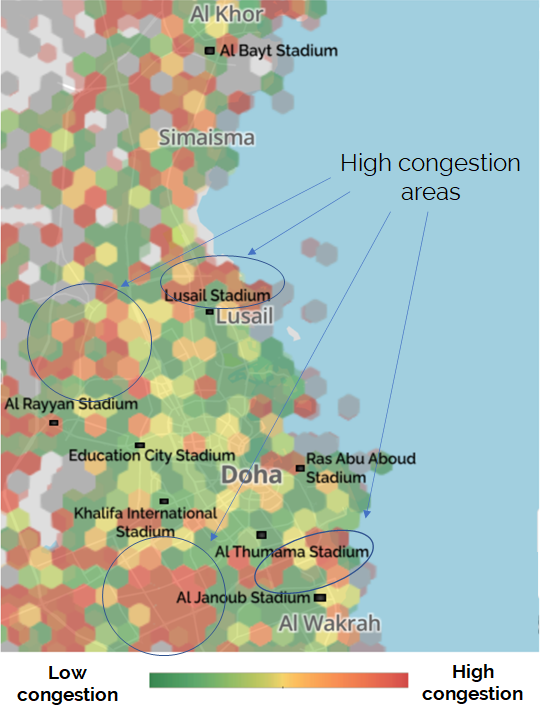 Tutela will continue to monitor the performance and congestion levels in Qatar in the run-up to and during the event.