3G sunsetting on Vodafone Italia: how will users be affected?

While this move specifically targets 4G capacity in the short term, making the most of valuable spectrum resources is an important topic for many operators at the moment. As it currently stands, major operators across the globe, especially in developed countries, have commercially deployed 5G networks, either using newly-acquired mid-band spectrum, or by repurposes sections of their existing spectrum resources. To expand their 5G coverage far and wide, however, they need more spectrum — and, given the scarcity of spectrum, that has operators looking inwards.

Spectrum refarming is one way to increase spectrum assets. Operators like Vodafone repurpose frequencies previously used for older technologies like 2G and 3G to free up capacity and re-allocate them for deploying newer technologies.

While refarming is a positive step for mobile network operators optimizing their scarce spectrum resources, it is important for them to gauge the impact of these activities on their subscribers. Specifically, it's important to assess where users are still relying on the older technologies. To examine this, we used Tutela’s crowdsourced data to measure the scale of 3G usage on Vodafone’s network in the country, and identify locations where spectrum refarming may have the greatest impact on users.

Nationally, Vodafone users spent ~6% of their time connected to 3G 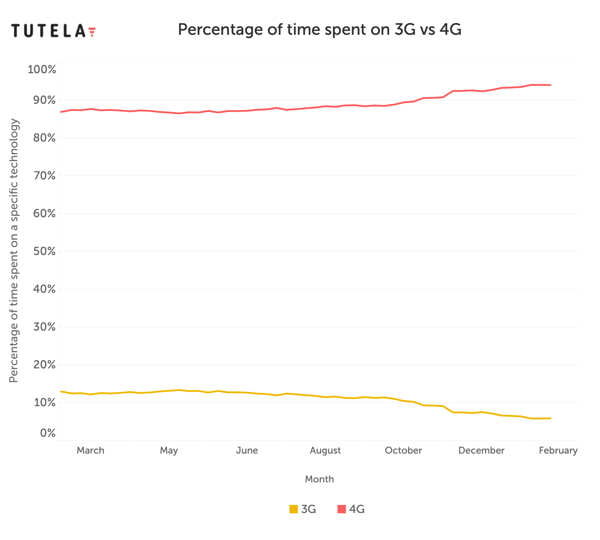 Even a year ago, in February 2020, Vodafone users spent the majority of their time connected to 4G, with 87% of observed connection time on the newer connection technology. However, the proportion of time spent on 4G increased over the last year, up to about 94% in February 2021. Although the proportion of time spent on 3G went down over time, the above chart also illustrates that Vodafone subscribers still spent approximately six percent of their time on 3G in the most recent month.

Drilling down geographically, using Tutela data, we can also observe Vodafone subscribers' time spent connected to each technology at a city level.

Subscribers in Catania spent 12% of their time on 3G

The chart above illustrates the percentage of time Vodafone users spent on 4G when on a mobile connection in the top 10 cities in Italy. On a city-wide level, Vodafone subscribers spent around 12 percent of their time being connected to 3G in Catania — double the proportion of time users spent nationally on 3G in early 2021. The highest proportion of time spent on 4G in these larger cities on the other hand was 93.4% in Turin.

The above map demonstrates which urban areas still have Vodafone network users spending time on 3G. We can see from the map that large cities like Genoa, Palermo, Catania and Florence have larger, red dots - indicating that there is both a notable portion of time spent on 3G infrastructure, and an overall high data usage. On the other hand, cities like Rome, Naples, Milan and Turin have Vodafone network users spending the vast majority of their time on 4G. The map also shows several smaller areas with high percentages of time spent on 3G - indicated by the smaller dark-red circles.

There could be a number of reasons why subscribers are compelled to use 3G over 4G (despite the potential benefit of higher speeds on 4G): using voice-only services, not owning a 4G capable device (although this is a small minority of Italian users), a network misconfiguration, or in case of remote/rural areas - simply a lack of 4G network availability.

In addition, 3G utilization also appears to be high among users of Vodafone's network who are not direct Vodafone subscribers, such as MVNO customers. The impact of network changes may be less directly considered by an operator when it comes to these wholesale customers, but Tutela's data indicates that they may be the most affected by changes to the legacy network. These are all factors that Vodafone will likely need to analyze and mitigate as it progresses its 3G shutdown.

However, where the extra 4G capacity can be deployed, and any coverage holes or configuration challenges have been addressed, the move from 3G to 4G will no doubt have many upsides for customers when it comes to the consistency and quality of their connections. The improved speeds and latency of 4G, while less mythical than the jump to 5G, will offer measurable improvements to the responsiveness (latency) of connections, as well as the likely percentage of tests above the 5 Mbps Tutela uses for Excellent Consistent Quality.

Tutela’s data, crowdsourced on actual user devices provides real-world insights that operators can use to identify and address challenges with 3G sunsetting, as well as implement impactful solutions to preserve and improve their subscribers' user experience when it comes to spectrum refarming. By using targeted insights, analyzed over different locations and device capabilities, operators can identify any potential problems well in advance, and ensure that the network upgrade improves subscribers' experience, rather than leaving them without a connection.