City breakdown of the ten largest cities across the US 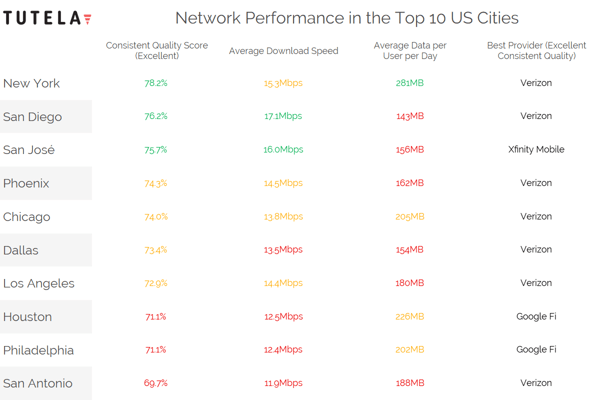 Last year, Verizon dominated the awards in our nationwide LTE network performance report, and a similar story has emerged when examining solely the largest cities in the US. Verizon had the best consistent quality in seven out of the 10 cities examined, and Xfinity Mobile, an MVNO running on Verizon’s network, won one of those three remaining cities.

When looking at average download speeds, the gap between Verizon and the competition is particularly notable. It’s not just that Verizon had the fastest download speeds in nine out of 10 cities, it’s that the distance between first and second place -- such as 30 Mbps to AT&T’s 14.7 Mbps in NYC -- that stands out.

This is likely due to some of AT&T’s older unlimited plans, which cap speeds at 3 Mbps, and its current plans which employ data prioritization policies to manage congestion. Throttled or deprioritized connections do not meet Tutela’s excellent consistent quality thresholds, which explains the drop in consistent quality in some instances.

The strong performances by some MVNOs also highlights how traffic shaping and prioritization, rather than just network quality, have started to impact subscribers’ experience. Xfinity Mobile runs on Verizon’s network, and in San José, provided a better consistent quality than that experienced by Verizon’s own users. Once again, that’s likely attributable to the different data plans and prioritization options employed by the networks.

Google Fi also put in a strong showing, taking first place in Tutela’s consistent quality benchmarking in both Houston and Philadelphia. Google Fi uses T-Mobile, Sprint, and, in some cases, US Cellular as its host network, and enables devices to switch between the networks depending on which signal is best. The fact that Google Fi users experience greater network quality than users on T-Mobile or Sprint in some areas suggests good things about what T-Mobile and Sprint customers can expect if and when the merger of those two networks takes place.

Other MVNOs consistently appear in the middle of the rankings -- offering average download speeds in the 10-15 Mbps range, and an excellent consistent quality score in the region of 60-70%. These mid-range placements, like the AT&T example, are likely because of plan throttling or data deprioritization on these carriers -- for example, on some unlimited plans plans, Republic reduces data speeds for users if monthly cellular data usage exceeds 5GB more than once in any six month period. 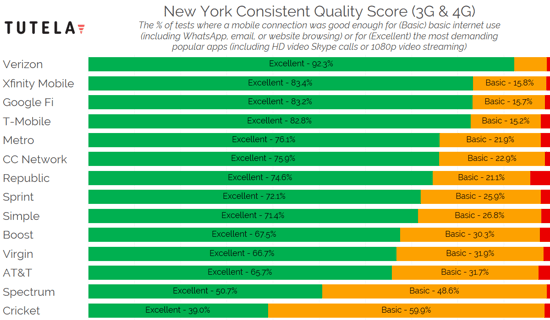 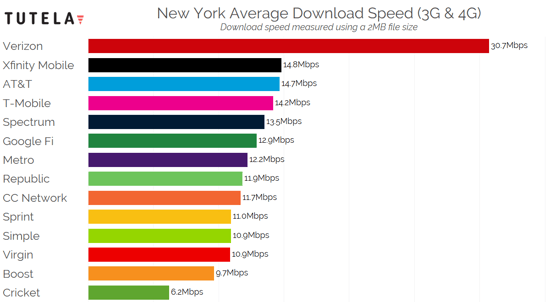 Of all the major cities we tested, New York City came top for overall consistent quality, with an average score of 78% of tests meeting Tutela’s criteria for an excellent”consistent quality score across all operators. Verizon beat that average significantly, with 92% of all tests meeting or exceeding the excellent consistent quality thresholds. That means that more than nine of 10 times, a Verizon customer in NYC should be able to reliably make an HD video call or stream 1080p video without any difficulties.

Among the other national network operators, T-Mobile was in second place, Sprint third, and AT&T last. This despite AT&T having the second-fastest network for download speed, and Sprint clocking in an average of just 10.9 Mbps.

As the largest city by population in the US, as well as the greatest consumer of data each day in our testing, New York will likely prove an interesting battleground between operators during upcoming 5G deployments. At MWC, Sprint announced it would be launching 5G services commercially in New York in the first half of 2019, T-Mobile confirmed it has installed 5G network equipment in the city, and Verizon has one of its five Verizon 5G Labs located in the city, where the network is working with startups to test out potential 5G use cases. Interestingly, New York does not appear on AT&T’s list of 5G network deployments, either in progress or planned, for later this year.

However, the true test for all operators will be in ensuring these deployments deliver a noticeable improvement in user experience, rather than simply a boost to the maximum speeds on offer. 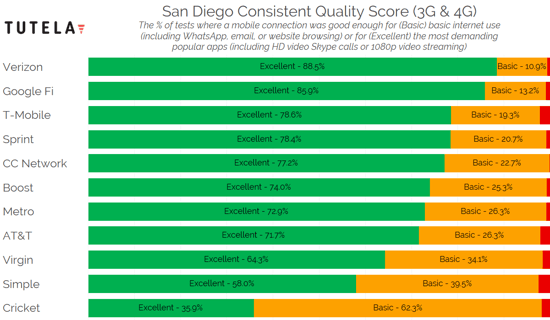 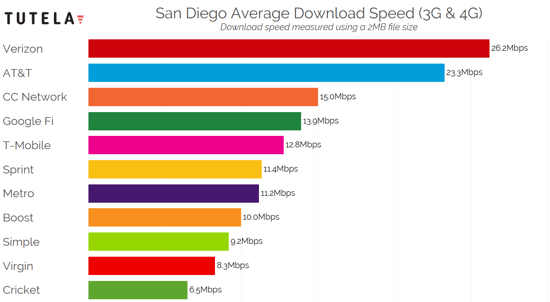 As home to Qualcomm, one of the big players in delivering 5G network infrastructure, San Diego has played host to a number of 5G trials. In December 2018, Sprint. Nokia and Qualcomm completed an over-the-air 5G transmission using 2.5 GHz and Massive MIMO on its live network in the city, while AT&T is promising to unveil a 5G network there early this year. However, daily data usage in San Diego was the lowest among all 10 cities in our testing, while the average download speed was the highest overall at 17.1 Mbps suggesting that of all the major cities, San Diego may be experiencing lower network congestion, and as such, may benefit less from a 5G rollout than other cities. 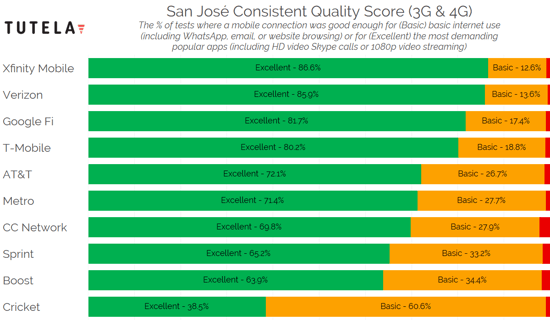 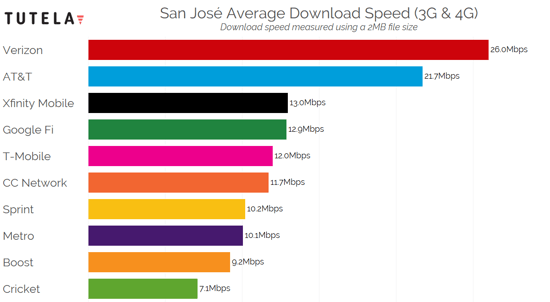 Xfinity Mobile beat out Verizon for the best excellent consistent quality result in San José, although  there wasn’t much in it -- Xfinity Mobile scored 86.6%, less than one percent better than Verizon.

Although it lost out to an MVNO for the best consistent quality, it is worth noting again that Xfinity uses Verizon’s network to provide services to its customers. Verizon was the best-performing network operator overall: it was second for consistent quality, and won the download speed race by over 4 Mbps compared to second-place AT&T.

There was a significant step down in consistent quality between third place T-Mobile and fourth place AT&T, of over eight percentage points. This is despite AT&T having a network nearly twice as fast in terms of average download speed in Tutela’s testing. 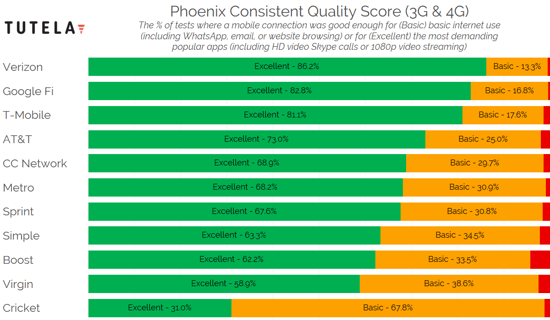 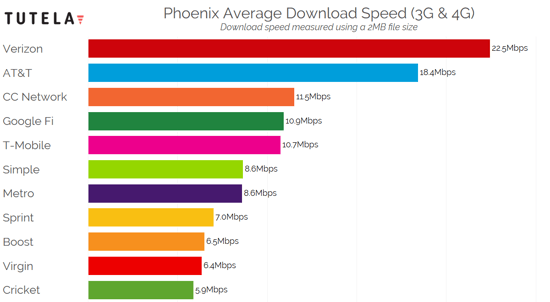 Notably, Google Fi outperformed T-Mobile on both download speed and consistent quality, which shows the potential benefit of using two networks (T-Mobile and Sprint) rather than just one.

Although Sprint did provide  excellent consistent quality for its users two-thirds of the time, its download speed performance was notably lower, just 7.0 Mbps. 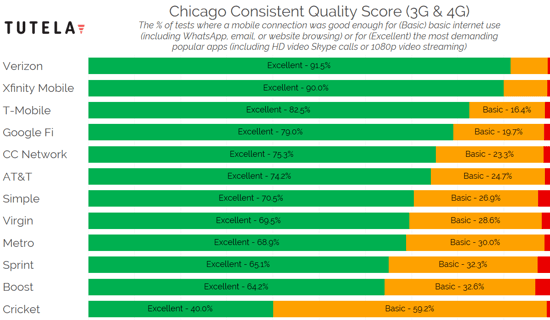 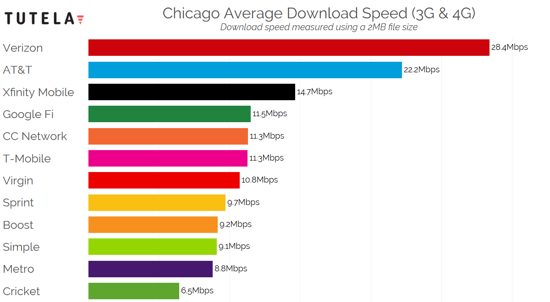 Verizon announced earlier this month that Chicago would be one of the first cities to receive 5G network services -- launching 11th April 2019. However, with expensive plans and few compatible devices, it is unlikely the city will experience any noticeable changes in mobile experience for the majority of users until 2020. That said, users in Chicago had the third highest daily data usage in our testing, after New York and Houston. 5G deployments may go some way to reducing the impact this demand has on existing network infrastructure. 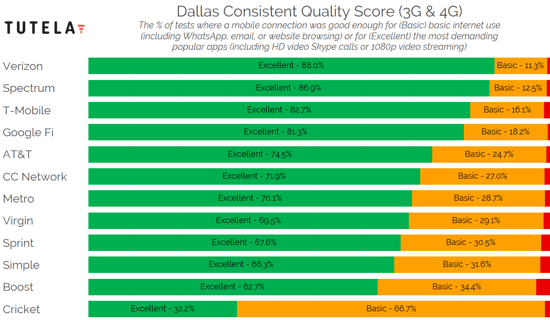 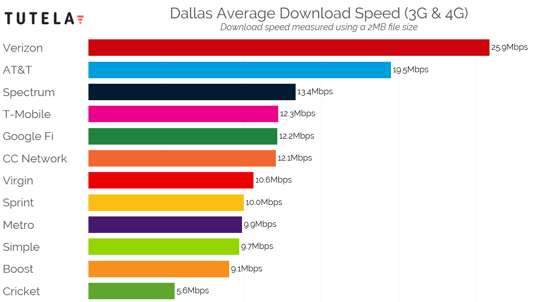 Dallas had the second lowest daily data usage out of all 10 cities tested, at 154 MB a day. 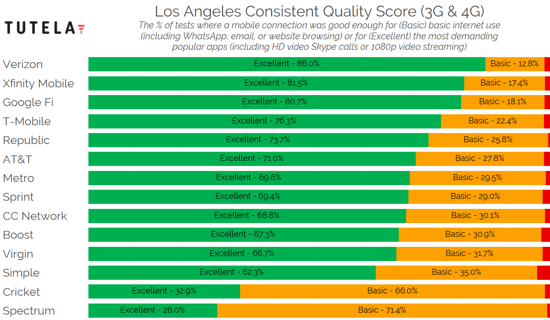 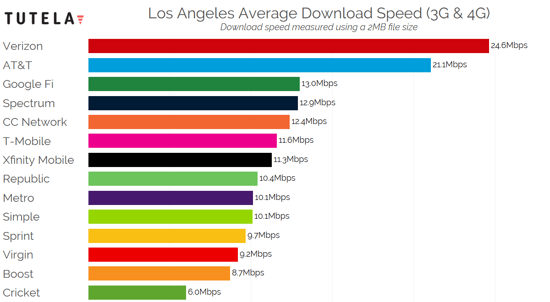 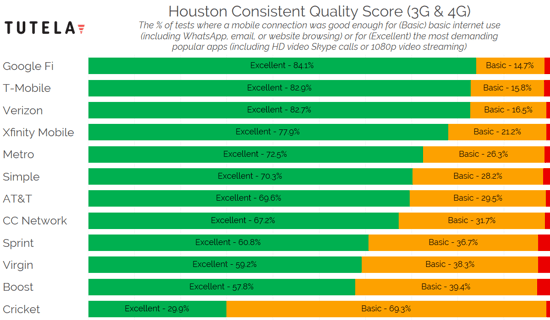 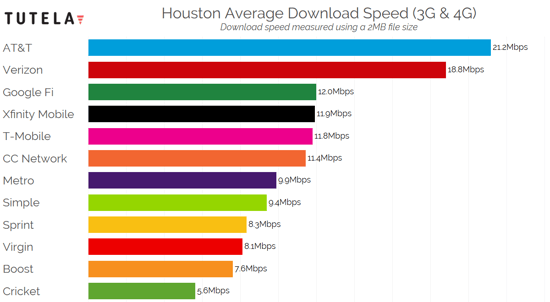 In addition, Houston had the second highest average data download per user per day, suggesting demands on the network are higher than in other cities. Operators will need to factor this higher demand into their strategy to ensure the network can handle this traffic load, especially at peak times. 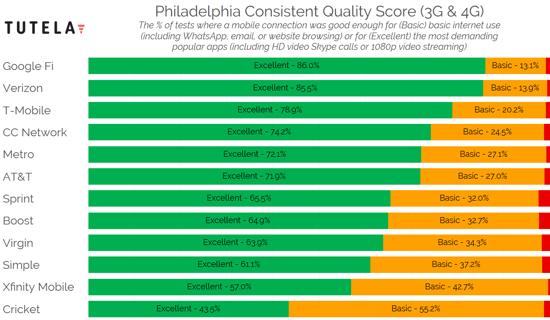 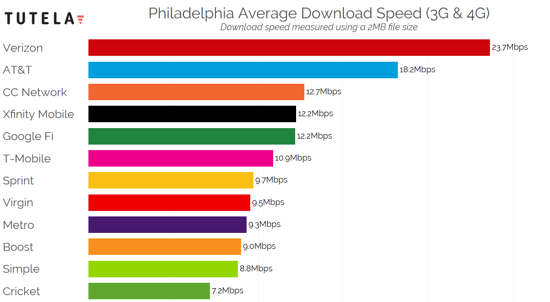 Overall, Philadelphia placed joint eighth with Houston for both consistent quality and download speed, despite having a daily data usage per user that was the fourth largest of the major cities surveyed.

In the city, Google Fi again took the best overall consistent quality result, with an impressive 86.0%. Verizon was behind Google Fi by just half a percent, but there was a big gap back to third-placed T-Mobile, at 78.9%. The gap between Google Fi and T-Mobile is likely attributable to the combined use of T-Mobile and Sprint’s network. 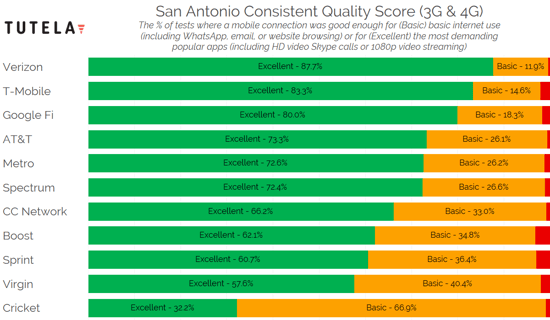 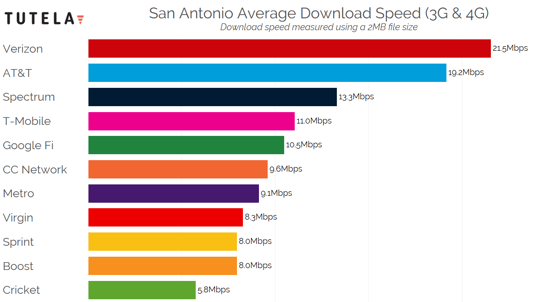 San Antonio, previously the home of AT&T’s headquarters, is also one of the original 12 cities selected for the network’s initial 5G rollout, switched on in December 2018. How this will affect mobile networks in the city as 5G devices become more common remains to be seen

Tutela measures network quality based on the real-world performance of users in the field. Results in this report are based on a testing configuration to represent typical (not maximum) performance of users. We used a 2 MB file to perform our download testing and a 1 MB file to perform our upload testing. Tutela employs software installed on more than 3,000 partner apps to complete frequent, lightweight tests using 2 MB files.

Our results differ from other network testing companies which measure the peak performance of networks under ideal conditions (such as downloading a 200 MB file).

In total, Tutela’s software operates on over 250 million Android and iPhone devices globally, collecting over 10 billion mobile data measurements every day. Our data scientists analyze results for each country every month, and our analytics platform, Tutela Explorer, lets operators chart, map, and filter over 80 key performance indicators into customized dashboards to help them better understand industry performance and benchmark against competitors.