Breakdown of the ten most populous cities across Mexico 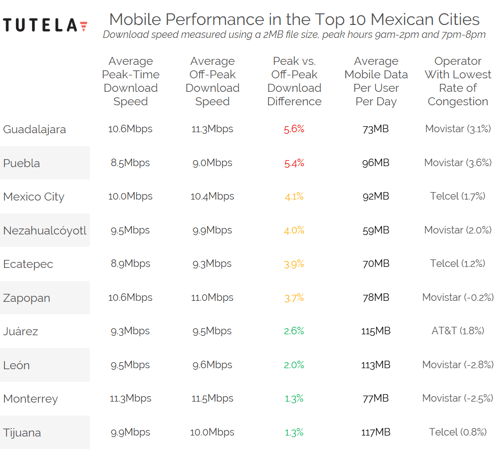 Network congestion represents one of the greatest problems that mobile operators need to manage on a day to day basis. Around the world, increasing subscriber load and data traffic means that during peak hours, operators may find themselves struggling to maintain the same network quality as during off-peak times. One way to measure this is in the change in average download speed, one of the clearest indicators of changing performance. By looking at the percentage change in this metric between different cities and operators, Tutela can reveal which areas appear most affected by network congestion.

It is important to note that a network with more congestion is not necessarily worse than a network with less congestion (as a congested network experiencing a speed reduction may still be faster than another, less congested one)-, but instead indicates that the load on a particular network is causing a change in performance. Areas with high network congestion are likely to need investment in future to avoid potential network quality problems as data traffic volume increases, for example, as more people watch HD video on their mobiles. This could include additional cell site densification, spectrum deployment or network infrastructure upgrades to manage load.

Across Mexico’s 10 largest cities, congestion (as measured by the percentage decrease in peak versus off-peak performance) was relatively low, ranging from just 1.3% through to 5.6%. Indeed, for some operators in some cities, networks even sped up during peak hours.To put Mexico’s results in perspective, Mexico City, which has a comparable population and population density to New York, experienced a slow-down of 4.1%. Meanwhile, New York’s networks experienced a 23% decrease in overall average download speed during peak hours. Part of this is likely due to data load; data usage is significantly lower in Mexico’s cities than the USA -- on average, mobile users in Mexico City used 68% less mobile data than mobile users in New York based on our panel, which could account for the lower rate of congestion in Mexico’s cities. This indicates that the current network infrastructure already in place in Mexico is more than suitable for handling an increase in users or an increase in plans with higher data allowances.

One common explanation given for network congestion is simply that users are using more data per day than the network can easily support. However, this is often too simplistic an interpretation. In the case of Mexico, three of the four top cities with the lowest percentage decrease in speeds also had the highest average mobile data usage per user per day. Similarly, Nezahualcoyotl had the lowest daily data usage per user, yet ranked seventh out of 10 for network congestion.

Even within individual cities, the picture was often complicated. Amongst the 10 largest cities in Mexico, Movistar had the most consistent download speed between peak and off-peak times in six cities, Telcel in three, and then AT&T in one (Juarez).

Taking a closer look at the five largest cities also echoed the national trend that the fastest networks may not necessarily be the least congested. In both Ecatepec and Mexico City, where Movistar was the fastest network during on-peak hours, Telcel's network had the more consistent download speed.

Mexico’s capital, Mexico City, placed eighth overall for decrease in download speed, with an average 4.1% change between off- and on-peak times. The city had the fifth greatest mobile data usage per user per day.

By operator, Telcel had the most consistent download speed, with a network slowdown during peak hours of just 1.7%. On the other hand, Movistar was the fastest network in the city both on- and off-peak, but with a higher rate of 2.9% network slowdown. This may in part be due to a slightly higher percentage of data use on Movistar going over 3G and 4G networks combined compared to Telcel. 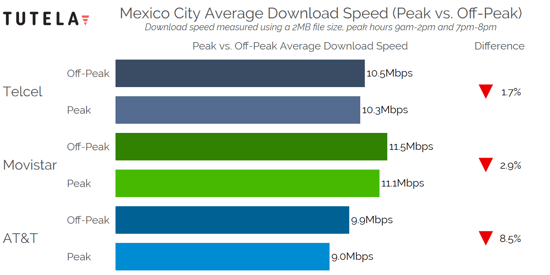 Ecatepec was sixth overall for consistent download speed, and had the second lowest average daily mobile data usage per user at 70 MB.

Telcel was the second-fastest network overall, but had the smallest decrease in peak hour performance, just 0.1 Mbps slower than during off-peak times. Movistar, whose network was 3.2% slower during peak hours, remained the fastest network both during peak and off-peak hours, with an average peak time download speed of 10.3 Mbps.

AT&T was the slowest network in terms of average download speed both on- and off-peak. This is despite AT&T having the highest percentage of its data usage travelling over a 4G network, ant Telcel having the least. AT&T also had the most significant slowdown of the three operators at 8.8% -- this was the second highest percentage slowdown for an operator in any of the five largest cities, the worst being AT&T in Guadalajara. 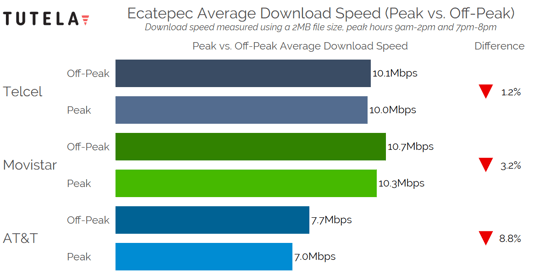 Despite being the fastest city during both on- and off-peak times, Guadalajara ranked last among the 10 largest cities for consistent download speed, with a percentage slowdown of 5.6%. The city had the third lowest data usage per day over a mobile connection, at just 7.3 MB.

By operator, Movistar had the smallest change in download performance between peak and off-peak times (3.1%), as well as the fastest network with a peak-hours average download speed of 14.5 Mbps. However, Movistar’s percentage decrease is greater than in other cities -- for example, the leading networks for consistent download speed in Ecatepec, Juarez and Mexico City all had slowdowns between just 1 to 2%. However, Movistar’s network in Guadalajara was also the fastest individual operator result among any of the top five largest cities, both on- and off-peak.

AT&T had the highest percentage of its data usage traffic over both 3G and 4G, despite having both the slowest off- and on-peak speeds. This may go some way to explaining why AT&T’s network had the largest network slowdown -- the additional load may be contributing to its rate of 9.4%. 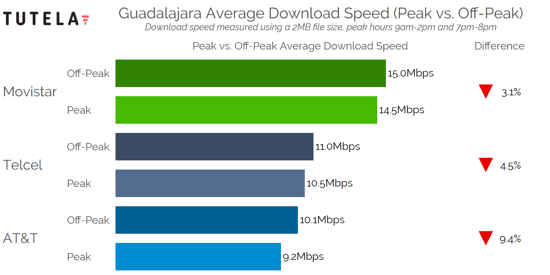 Puebla was second last in terms of download speed change, with a network slowdown of 5.4%. Overall, the city also had both the slowest on- and off-peak download speeds among the 10 cities tested. Data usage in the city was moderately high -- Puebla had the fourth highest data usage at 96 MB. 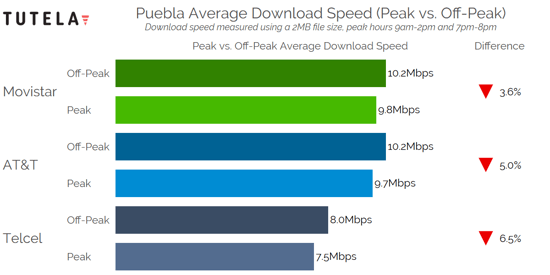 Juarez finished fourth overall among the 10 largest cities in terms of consistent download speed, with the second highest daily average data usage per user after Tijuana at 115 MB.

AT&T was both the fastest network both on- and off- peak, at 11.4 and 11.6 Mbps respectively. The network also had the lowest percentage slowdown.

Both AT&T and Movistar users used 4G more heavily for data usage - 21.3% of mobile data usage for AT&T customers went via a 4G connection, while the same was true for 17.3% of Movistar data usage. This was despite the fact that the two networks finished and opposite ends of the results table, with Telcel in the middle. Telcel, for comparison, had just 12.7% of data usage over 4G. 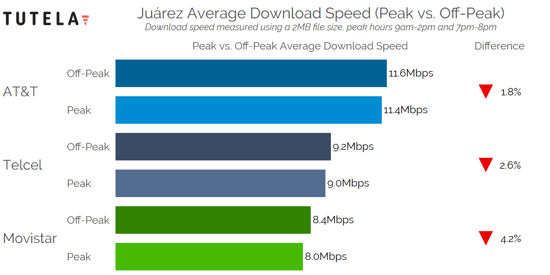