Breakdown of the ten most populous cities across India 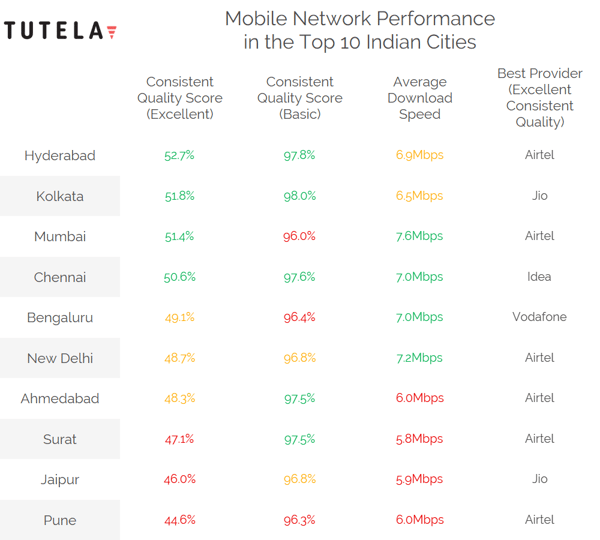 Amongst the top 10 most populous cities in India, Hyderabad’s mobile networks had the best excellent consistent quality, with 52.7% of tests over any mobile network meeting Tutela’s thresholds. India’s largest city, Mumbai, had the highest average download speed at 7.6 Mbps, while India’s capital ranked sixth overall for excellent consistent quality.

By operator, Airtel was the clear winner in Tutela’s testing, ranking top for excellent consistent quality in six of the 10 cities tested – Hyderabad, Mumbai, New Delhi, Ahmedabad, Surat, and Pune. Jio came top in Kolkata and Jaipur, while Vodafone was best in Bengaluru and Idea in Chennai. While Vodafone and Idea’s networks have continued to operate independently since the finalization of a merger last year, these results provide a small indication as to how complementary the two brands may prove to be to each other.

It is important to note that excellent consistent quality is representative of more demanding use cases such as streaming HD video or making reliable group video calls. In Tutela’s State of Mobile Networks Report for India, published in February 2019, Jio had the best overall consistent quality across the whole country, with 95.7% of connections meeting the threshold for basic activity. This is suitable for tasks like browsing normal web pages, internet messaging and social networking.

However, as basic consistent quality in India approaches 100% -- as can be evidenced on a by-city basis in the ranking table -- it’s important to assess how the network performs in more demanding situations. According to a recent Nielsen report, video-streaming, browsers, social networking and image apps account for more than 50% of total time spent on smartphones in India. As video streaming becomes one of the most popular use cases for smartphone users, the excellent consistent quality threshold becomes more important for reliably benchmarking how users are experiencing their mobile networks.

To compile this report, over a two-month period Tutela examined more than 34 billion network quality measurements, including over three million speed tests and 51 million latency tests. Our data was collected from 01 February 2019 to 31 March 2019.

Hyderabad had the highest excellent consistent quality among the top 10 largest cities in India, at 52.7% in Tutela’s testing. The city’s mobile networks had an average download speed of 6.9 Mbps, fifth overall among the top ten cities.

Hyderabad had the lowest percentage of traffic go over 3G (2.9%), and highest over Wi-Fi (49.4%), perhaps a result of a large free public Wi-Fi initiative launched by the Telangana State Government in 2017. 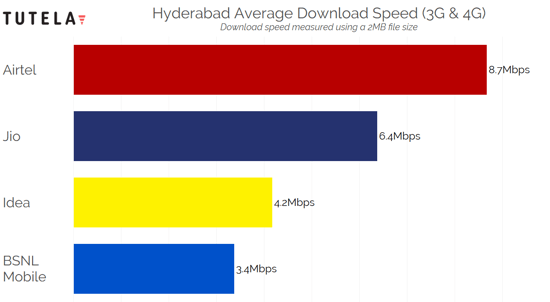 Despite being one of the world’s densest cities, Mumbai performs well in Tutela’s testing, placing third among the 10 largest cities for excellent consistent quality, and also providing the highest average download speed. Both Vodafone Idea and Airtel have recently announced investment in 4G in Mumbai, and this performance suggests that this investment may be having a real impact on citizens in India’s largest city.

Airtel had the highest excellent consistent quality at 56.6%, as well as the highest average download speeds at 9.0 Mbps. However, in terms of basic consistent quality, Airtel was slightly behind other operators at 91.2%. Here, Jio came top with a near-perfect 98.5%, meaning that customers could expect to be able to browse the web almost any time they had a signal. This may in large part be due to the fact that Jio’s network is built around 4G, and 4G connections almost always hit the basic thresholds. Meanwhile, Jio’s third place finish for download speed may be due to the sheer volume of traffic on its network -- nationally, Jio’s network handles at least 3 times more traffic than its competitors per SIM per month.

Mumbai had the second highest percentage of traffic over Wi-Fi, at 47.4%, and the second lowest of 4G at 49.0%. Overall Mumbai had the lowest level of basic consistent quality among the ten largest cities in India (although still at 96%), which could indicate that even with the proliferation of Wi-Fi and 4G networks, congestion remains a problem.

Jio had the fastest network at 7.2 Mbps, but Airtel was only just behind at 7.1 Mbps. BSNL’s placed last overall for pure download speed with an average of 3.8 Mbps, although this is not surprising given the network’s heavy reliance on 3G. 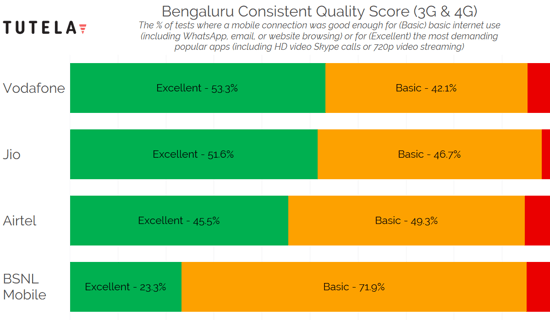 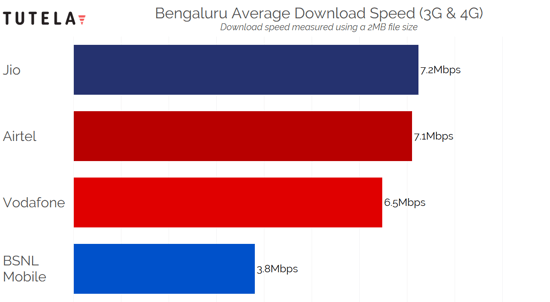 Airtel had the highest excellent CQ among operators, at 52.8%, but Jio, which placed second, had the best basic consistent quality at 98.2%. Airtel was also the fastest mobile network in terms of download speed at 8.7 Mbps, followed by Jio at 6.8 Mbps.

After Pune, New Delhi had the second highest percentage of traffic over a 3G network, at 6.1%. This may explain why New Delhi’s excellent consistent quality score is lower than other similar cities, as 3G connections often have latency that is too high to meet the threshold. 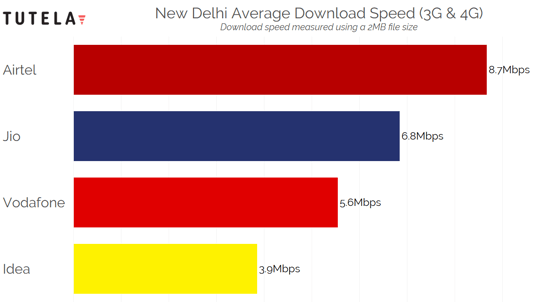 Airtel had by far the highest excellent consistent quality at 59.5%, according to Tutela’s testing. Jio comes in second, although Jio, Vodafone and Idea all have very similar excellent consistent quality between 45-46%. Airtel also just had the joint best basic CQ at 98.4%, alongside Jio. Airtel was also the fastest network in Ahmedabad at 7.4 Mbps.

BSNL’s network had the lowest consistent quality -- both against the excellent and basic thresholds. 25.9% of tests did not meet Tutela’s threshold for basic quality suggesting that a quarter of the time, the network will not allow users to reliably browse the web or make VOIP calls. This is likely due to high latency on the network. 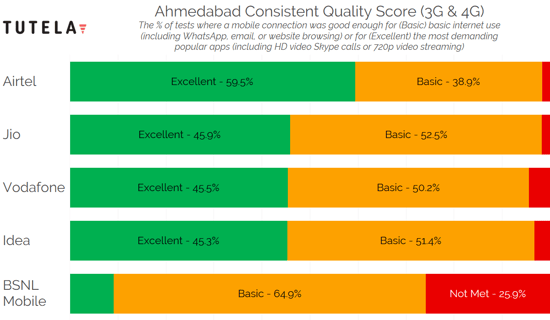 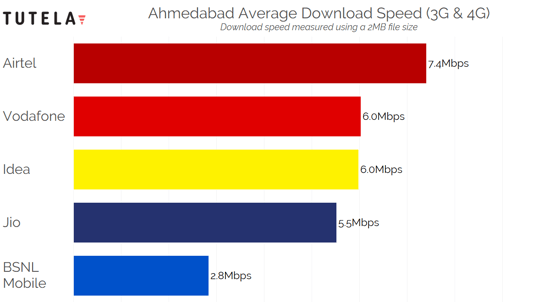